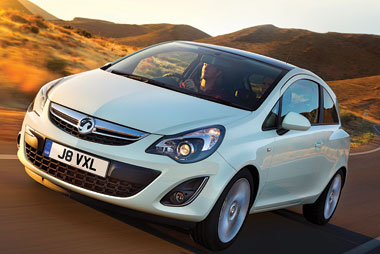 The Vauxhall Corsa, a stalwart of the small car sector in fleet, has been given a mechanical and cosmetic overhaul for 2011 to keep it fresh alongside slightly newer rivals from Ford and Volkswagen.

CO2 emissions have been reduced, most notably to 94g/km on the 95bhp version of the three-door 1.3 CDTi Ecoflex, thanks to the addition of a stop/start system. The five-door manages an equally impressive 95g/km.

That means the lowest band for BIK tax for diesels (13%) and congestion charge exemption.

Fuel consumption on these models is low too, with combined cycle figures of 80.7mpg for the three-door and 78.5mpg for the five-door. The rest of the Ecoflex models fall into VED bands B or C, not quite low enough to qualify for free VED and congestion charge exemption, but enough to take advantage of sub-120g/km cars falling into the lowest BIK bands.

Externally, the design has been changed to incorporate a new grill and badge, along with new bumpers and ‘eagle eye’ headlights similar to those on the Meriva.

Inside the cabin, a range of new colour options is available for the dashboard trim and for the seats, and while they lift the ambience somewhat, the quality of materials leaves a little to be desired, with a lot of cheap-looking plastic on display.

A new infotainment option is available on all but the lowest two equipment grades and, while expensive at £750 it provides sat-nav, Bluetooth and USB connectivity. It’s very intuitive and simple to operate.

Ride and handling have been improved over old models. Softer front springs and new anti-roll bar bushes mean the Corsa is fairly nimble and enjoyable to drive without compromising ride comfort.

We drove the 1.3CDTi in both power guises: 74bhp and 95bhp. Both produce the same peak torque of 140lb/ft, although it is available throughout more of the rev-range on the higher powered unit.

Both were adequate in town and on the motorway, where they’re fairly quiet and subdued, though they do clatter a bit at low speeds.

The updates to the Corsa have made more appealing in an increasingly image-oriented sector, and coupled with low running costs it makes a good case for itself, despite residual values still being slightly lower than Volkswagen Polo and Ford Fiesta.