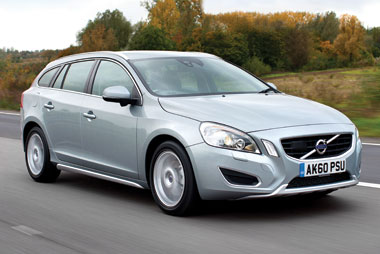 Volvo might have ignored its traditional ultimate load-lugging ability with the V60, but its new DriveE offers a stylish fleet friendly alternative to the premium Germanic norm.

Powered by a 1.6-litre turbodiesel, the DriveE’s 115bhp might be relatively modest against its rivals, but fine comfort, an easy-to-use, nicely-finished interior and smart looks make it a convincing choice.

It’s bang-on its Germanic – and Swedish, if you count Saab’s latest, though ancient, 9-3 TTiD Sportwagon – rivals for economy and emissions, too.

Indeed, its combined consumption figure of 62.8mpg matches exactly that of BMW’s 318d Touring as well as that Saab.

At 119g/km, its CO2 emissions undercut German rivals, even if they remain in the same tax bracket, though both the BMW 318d and Audi A4 2.0 TDIe deliver better performance thanks to greater power outputs.

It’s the Volvo’s other qualities that make it such an appealing choice though.

The 1.6-litre engine is quiet and smooth, the six-speed manual transmission is slick and the steering is accurate and well weighted.

Near silent on the motorway, the DriveE is a natural cruiser, and around town its stop-start system is quick to react and quiet in operation.

Specify your V60 in R-Design trim and you gain range-topping D5 styling inside and out, but there’s a slight trade off regarding ride comfort – R-Design adding firmer suspension.

It’s never harsh, but the odd knock over ripples is somewhat at odds with the V60 DriveE’s otherwise relaxed demeanour.

Ultimate load carrying capacity might have been sacrificed for style, but Volvo remains as utterly committed to safety as it has always been.

The V60 – and its S60 saloon sibling – come with collision avoiding City Safety as standard together with an extensive list of airbags, and traction and stability control systems.

A Pedestrian Detection system with a Full Auto Brake function, using a mixture of radar, laser and camera technology to recognise humans more than 80cm tall is offered as part of the £1,485 Driver Support Pack.

Standard equipment levels are comprehensive across the range, with climate control, cruise control, steering wheel audio controls and alloy wheels on all models.