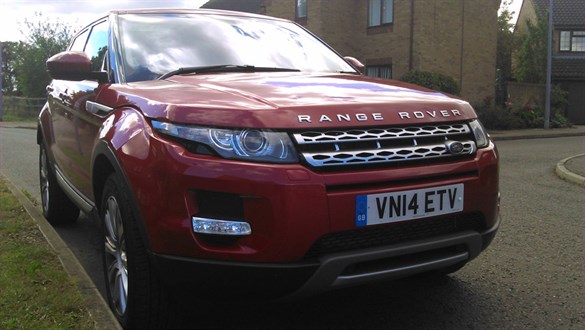 The Range Rover Evoque seems to polarise opinions, certainly as far as its looks go. Some love the low slung roofline, others believe it looks squashed and out of proportion.

Me? I’m warming to the looks having driven the car for a few weeks; it looks good in the car park sat between two bland looking family cars (which ones? Take your pick) but is at its best in motion on sweeping A-roads.

Step inside the Evoque and any dissenting voices immediate quieten. The high quality leather and stitching interior, tactile switches and an intelligent simple-to-use infotainment system, make the Evoque a welcoming and welcomed place to be.

It also has ample room for three in the back despite the sloping roof, while the full panoramic glass top adds to the sense of space.

Performance-wise, the 2.2-litre 150hp eD4 diesel engine delivers a fair drive. On acceleration it runs out of puff surprisingly quickly, necessitating a hasty run through the manual six-speed gearbox, but cruises at motorway speeds with minimal fuss at a quiet xxxrpm.

For this type of car, it’s solid but not spectacular. However, the lack of temptation to overuse the accelerator – there’s little point in getting carried away with an 11.2-second 0-62mph time - does result in efficient travelling.

Fuel consumption nudging 50mpg is achievable (respectable compared to the official 56mpg combined figure), although we’ve settled down to an average of around 44mpg.

So far, so good. But we do have a couple of niggles.

Our car is front-wheel drive for the lowest possible CO2 emissions on the five-door of 133g/km, but the tyres aren’t very grippy, resulting in uncalled-for input from the traction control even at relatively slow cornering speeds. Over-steer feels within constant reach and it doesn’t inspire confidence.

Second, the sat-nav system seems determined to sniff out traffic jams and lead me right to them. On numerous occasions it has shown a route with a green light for jam-free travelling only to hit miles of queues. And on other occasions it is determined to lead me away from a potentially appointment-breaking logjam, only for me to override its wishes to find a clear road.

Now, a sat-nav system can only be as good as the data that’s being fed in from whichever mystical sources inform cars about traffic jams, but I’ve not experienced such wanton misinformation in any other model. In short, I don’t trust it; cue a return to FM radio traffic updates.

On balance, though, we’re pretty pleased with our first two months with the Evoque. It’s deservedly making a mark in the fleet sector among user-choosers and has laid a solid foundation for further fleet-focused launches next year from Land Rover such as the Discovery Sport.