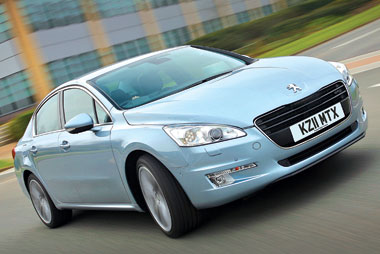 At the time of writing, the Peugeot 508 has the lowest CO2 emissions of any mainstream upper-medium car.

Using the latest technology with its 1.6-litre e-HDi diesel, it achieves 109g/km of CO2 and produces 112bhp.

It’s an excellent illustration of how the addition of hi-tech features and downsized engines have been able to create significant reductions in emissions.

As company car tax has evolved, so technology has moved to catch up.
Although a brace of diesel versions of the 508 offer CO2 emissions of less than 130g/km, only the e-HDi has CO2 emissions of just 109g/km (from July 2011 production).

To achieve this, it has been fitted with a sequential manual gearbox with automatic mode, which in default mode is programmed to optimise fuel economy.

Anyone used to a conventional torque converter automatic (or a double-clutch auto for that matter) might be surprised and perhaps disappointed at the lack of smoothness when accelerating.

However, with more miles spent behind the wheel you learn to leave a short pause to allow the transmission to change gear more smoothly.

Driving it like a conventional automatic results in disappointingly uneven progress, but you can help keep progress smooth.

Only resort to manual mode to short-cut selection of the correct gear to allow safe overtaking.

Leaving the gearbox to its own devices only seems to build in a delay.

Living with the car will result in drivers getting used to the transmission, and its stop-start system allows extended periods with the engine off in traffic.

With stop-start in a conventional manual transmission, the driver needs to ensure the car is in neutral before the engine cuts out automatically.

As the 508 e-HDi doesn’t have a clutch pedal, the engine will switch off when the car slows down and reaches 5mph in anticipation of stopping.

Holding the car on the footbrake with the gear lever in ‘D’ keeps the engine switched off, and it comes back to life the moment the brake pedal is released.

Although the official fuel consumption of the e-HDi is close to 70mpg on the combined cycle, we weren’t able to achieve it during our time with the car.

However, we weren’t too far off as we were on course for a genuine 700 miles-plus from a tank of diesel.

Peugeot offers the 508 in an SR grade targeted at fleet users which contains key items of equipment as standard.

Meanwhile the 508 is true to the tradition of large Peugeots since the 405 and is a delight to drive, despite the relative lack of performance of the e-HDi.

The 508 is well equipped and close to the Mondeo and Passat on P11D value. Latest sub-120g/km Insignia in Exclusiv trim looks pricey.

The lowest CO2 emissions result in the best on-paper fuel consumption so the Peugeot has a small advantage here over the others, although there isn’t much in it.

All products are excellent, and it seems the new 508 just edges out on overall running costs, but only by a small margin.

508 is competitive, and it’s probably early days for the Insignia, due inSeptember. Should improve. Lowest contract hire rates from www.comparecontracthire.com

It’s a tough call as three of the cars are very closely matched on costs and are very capable.

The Mondeo probably offers the best drive – but only just – while there’s little to choose between them for interior quality.

Ultimately, when all cars are so good we ought to choose the winner by costs, giving the win to the Passat.