ACCORDING to Alfa Romeo’s new marketing for the 159, ‘mediocrity is a sin’. Odd then, that for many years in so many ways, the famous Italian brand has been a byword for mediocrity.

And here it is now, trying to claim that the new 159 heralds another re-invention and that things are going to be better. The big difference this time is that it might actually be true.

Alfa Romeo is a brand that has so much going for it – great looks and evocative history, but thanks to legendary poor reliability and ropey dealer service, it never quite hit the heights it should have.

The extremely pretty 159 replaces the 156, which when it was launched in 1997, proved to be something of an aesthetic renaissance, debuting the shield-shaped grille.

Designed by Giorgetto Giugiaro, the 159 is low, sleek and elegant. It’s the best looking car in the sector, eschewing the bluff, blocky design favoured by most of the other, mainly German, manufacturers. From all angles it radiates luxurious Italian chic. I could sit and look at it all day. 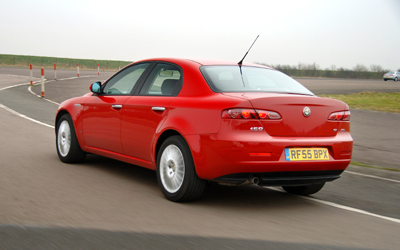 It’s also got four door handles now, where the 156 had the back two neatly hidden. Apparently, although very clever, passengers getting in the back of the 156 often got confused and tried to get in the front.

The chassis is entirely new and unique to Alfa and is 105mm longer in the wheelbase than the 156, with claimed improvements in interior space and handling as a consequence. The front suspension unit has been carried over from the 156, but has had a number of developments to complement the stiffer chassis while the rear multilink set-up is new.

There are five engines available, three petrol and two diesel. Of most interest to company car drivers will be the 150bhp 1.9 JTDM and the 200bhp five cylinder 2.4-litre JTDM diesels.

The petrol engines are part of the recently-demised link with GM and come in 160bhp 1.9 JTS, 185bhp 2.2 JTS and 260bhp 3.2 V6 JTS formats. But with a best combined fuel consumption of 32.5 for the smallest petrol, the Fiat-made diesels are the ones to go for.

All are front-wheel drive, apart from the 3.2 V6, which will come with four-wheel drive in March.

Prices start at £19,995 on-the-road for the 1.9 JTS Turismo, with diesel equivalents only £500 more, which is a considerably smaller differential than most of its premium competitors. At the moment, because Alfa Romeo believes it will sell only 40% of 159s to fleets, it expects the mix to be 50/50 for petrol and diesel. If that balance shifts towards fleet, the diesel percentage is likely to climb thanks to the more favourable tax rates.

Alfa Romeo recognises it has not served the fleet industry as well as it could have in the past, and as a result of the new management team, the decision has been made to recruit a fleet director, who reports directly to Tony Dittli, fleet boss of Alfa and Fiat.

The new director will be responsible for improving relationships with big fleets and leasing companies.

Part of the problem Alfa Romeo has suffered is that leasing companies – a key sales channel for this sector – don’t trust the brand to deliver. As a result most leasing firms predict very conservative residuals and high servicing costs, which make it very difficult to get good monthly rentals. The 156 sold well to start with, with a best year of 11,000 in 2001, but residuals dropped badly as more and more were pushed into the market, and fleets started to experience some patchy post-sale service.

Alfa Romeo marketing director Nicholas Barnard says the approach for the 159 is completely different. In a full year, he expects to sell 3,500 159s with a firm order for every car heading to the UK.

On top of that the firm wants to remarket the vast majority of the cars through its dealer network. And that network is to be increased from 67 to 90.

This strategy, Barnard claims, will strengthen residual values and ensure the car becomes a competitive product in the leasing market. It will have to. At the moment CAP is quoting three years/60,000 mile predictions ranging from 35% for the entry-level diesel down to 29% for the top end car, which is some way off what BMW, Audi and the rest obtain.

But with such a fantastic new product, now more than ever there is a chance for Alfa to crack the corporate market and prove the doubters wrong.

IT is obvious that the 159 is a stunning-looking car. But in such a competitive sector it needs to deliver more than just a sexy body. Luckily, the interior seems to continue the theme. It is much less oppressively dark than the German competition and actually feels lovely and light, thanks to the large sloping centre console entirely covered in milled aluminium. The cute little recessed dials that make Alfa’s feel so Italian are continued, while the chunky steering wheel is also stylishly metalled. Some cheap door plastics let down the feeling of quality, especially as they try to ape the better quality plastics on the dash and the indicator stalks are a bit wobbly. But in general, those are the only areas that don’t feel solid and classy.

The seating position is Germanic in its ergonomic efficiency and the ribbed leather seats, standard on the Lusso version, are lovely. So far, so good.

We drove the two diesel engines and both are excellent. The 1.9 JTDM is quiet, smooth and flexible and hurries the 159 along. The six-speed gearbox, unlike the Lexus IS, is perfectly spaced and has a solidly-machined feel. In fact, such is its smoothness you find yourself happily driving along in third or fourth without even realising it – quite a performance for a diesel. We hit some heavy storms while driving the car and there was plenty of grip, despite shovelling lots of torque through the front wheels. 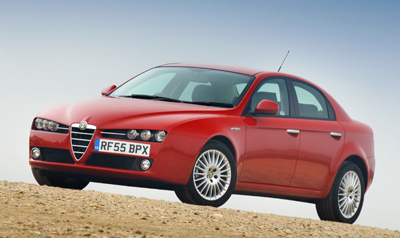 The ride and handling are also excellent. It rides like a big solid car, dealing with bumps with a meaty thump while the steering is direct, precise and becomes much more lively as you build speed. Add in that the brakes are progressive and full of feel and you have a car that is very well sorted and very enjoyable to either cruise about in or push hard.

The 2.4-litre is more of the same, but is obviously faster and asks more questions of its front-end grip, especially in the wet. It also has one of the most appealing engine notes of any diesel I have ever driven. You actually enjoy listening to its beefy note.

THE new 159 is the most pleasant surprise I’ve had in a while. Not only does it look great, but drives beautifully and has some wonderful diesel engines. 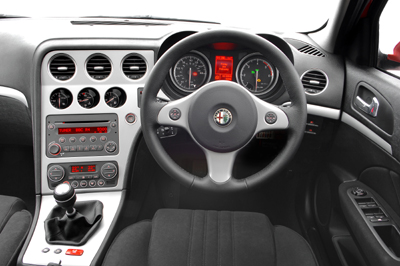