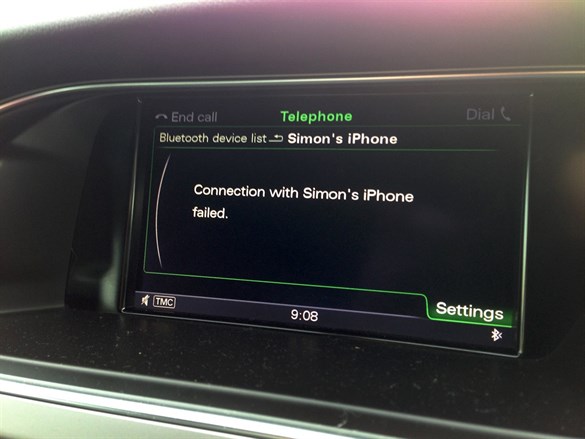 I was the happy recipient of a mobile phone upgrade last month, which was good news in a way, but caused a little problem in the Audi A5 Sportback.

Unlike many cars that come with a standard USB socket into which you connect your MP3 player or similar device, the Audi comes with a socket in the glove compartment with a connector lead supplied for your own music player.

The one it came to us with is compatible with an Apple iPod or iPhone 3 or iPhone 4. However, Apple has decided that the iPhone 5 should have a different type of connector. A smaller one, rendering any car that has a connector provided for the earlier generation phone, or at least the cable, obsolete.

Audi isn’t to blame for my vanity in wanting to upgrade my phone, but it does seem a little strange that the integrated USB favoured by other manufacturers should be ignored, and Audi is one of a few manufacturers to provide MP3 player cables rather than a standard USB socket.

I’m sure if this were to be my company car for the next few years there would be no problem in a dealer sourcing a correct cable, and given the current mileage on the car it’s probably only a few weeks away from a visit to a dealer for its first service.

But at present the only way I can listen to my preferred music is through the Bluetooth system.

And as I hadn’t bothered to pair my phone to the car previously, it wasn’t necessarily a straightforward process as the car and my phone had a frosty introduction with neither prepared to acknowledge the presence of the other for several hours.

Fleet operators whose policy it is to ban all mobile phone calls while driving might be well served to think twice before deciding it isn’t worth selecting integrated Bluetooth on cars where it’s available as an option.