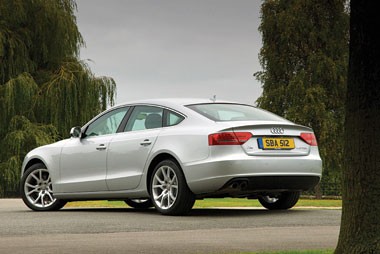 With the ability to spread its sales volumes across several market sectors, it can keep its prized residual values high, thus making its offerings even more appealing to corporate customers through competitive contract hire rates.

And the fact that it can spin-off new models from existing platforms makes this policy doubly appealing as development costs are much less than they would be for creating a new model from scratch.

It shares the A5 Coupé’s front-end styling, adds in frameless doors to give that ‘coupe’ feel and shares much of its underpinnings with the A4 family.

And it is also very practical thanks to that hatchback rear boot opening.

Carrying capacity is 480 litres with the rear seats in place, and 980 with them folded down.

So far, we’re averaging 47.5mpg, with many of the journeys being short affairs, although a recent long distance motorway run up to Liverpool from Peterborough showed an impressive average of 50.9mpg.

Given the A5 Sportback’s positioning as being more coupé-like, it costs more to buy than its more prosaic stablemates – an A4 saloon with the same engine and specification level is priced at £25,210 while an A4 Avant costs £26,300.

However, given the lower volumes (Audi expects to sell around 5,000 units per annum, compared to around 31,000 A4s sold in 2008), that’s not a huge premium for exclusivity.