THE invisible man seemed to have joined me when I went on a business trip in our long-term Audi.

After putting on my seatbelt, I set off and the seatbelt warning alarm started to chime away.

I pulled over and checked my belt and couldn’t find a fault, but try as I might, I couldn’t stop the chime. Eventually, I buckled the passenger seatbelt and the infernal alarm stopped.

Very spooky, but I was certain I wasn’t at the receiving end of a ghostly visit, so I called Peterborough Audi rather than Ghostbusters.

I had already been there once for them to fix a loose numberplate, which was done while I sipped a very nice coffee in their immaculate showroom.

The car was collected and while in the garage, I asked for the rear wash/wipe to be fixed, as it didn’t seem to be washing.

The car was returned immaculately cleaned, but the driver said they were waiting for a part and would call when it was in stock.

I’m not sure what the part was (as the rear wash works, I’ll assume it’s for the seat) and I haven’t heard from them since, but they did leave behind an annoying rattle in the boot, which I can’t seem to trace or fix. The invisible passenger still joins me now and again, too.

Apart from these niggles, I have nothing but praise for our A6 estate, which is taking a bit of a pounding in terms of hard miles on the motorway and country roads.

An over-enthusiastic entry to a humpbacked bridge had added some scrape marks to the bottom of the front skirt and careless parking by other drivers has added two minor scrapes. These will all be tackled with a thorough smart repair overhaul soon in reward for the car’s sterling efforts in the face of my rough ownership.

The battle scars are the only sign the Audi has shown of living the tough life of a fleet workhorse, as it provides a smooth life for the driver.

Its diesel V6 is rarely heard, but has bags of power for overtaking and keeping up with busy traffic, especially when you use the steering wheel paddle gearshift.

The only failing I have found is its ponderous reaction to a sharp stab at the accelerator to join swift moving traffic from a standstill. There can be two or three seconds of very mild acceleration before the car suddenly roars into life.

The paddleshift comes into its own on winding country roads, where the Audi’s talents, backed by its four-wheel drive system, far exceed mine.

Despite some very swift entries to sharp corners, I haven’t yet felt that the car is anywhere near its limits. And despite all that hard driving, the A6 has returned 33mpg on average during more than 3,300 miles.

That would have had some volume brands screaming for mercy.

Despite this, the car says there is still more than 3,300 miles to go before it’s next service, or 438 days.

No prizes for guessing which will arrive first. 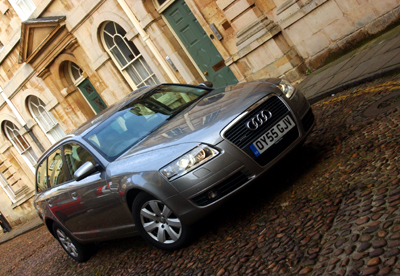