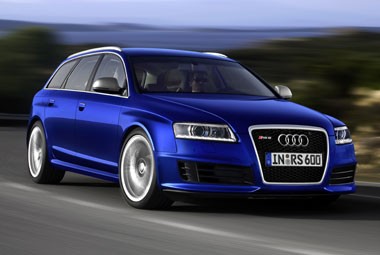 I met a number of senior executives from Audi in Germany the other night. On the whole, they were very agreeable company.

Certainly, there was nothing to suggest they were in any way unhinged mentally. All I can think is that they must be on some very powerful drugs, because they are all, definitely, barking mad.

Why? Because they were the men who signed off production of the RS6 quattro Avant – the most powerful production Audi of all time, a car that is so ridiculous, yet utterly awesome.

Under the bonnet is a 5.2-litre V10 engine borrowed from the Lamborghini Gallardo and put into use in the lesser S6 model.

However, with 435bhp that would be nowhere near powerful enough for an RS Audi. So the firm has bolted on a pair of turbochargers, boosting power to 572bhp.

That’s nearly 100bhp than a Porsche 911 Turbo and just 60bhp shy of the fabled McLaren F1.

And all of this 572bhp is packaged in an A6 bodyshell with little in the way of bells and bulges. For ultimate stealth, the RS6 is about as good as it gets.

At least while it’s stationary. On the move, there’s no doubting that the RS6 is something different from the A6.

The noise coming from the twin-turbo V10 is awesome – a symphony of tunes, ranging from mellow base to howling while depending on rev.

Inside it is pure A6, which is no bad thing.

The cabin quality is excellent, there’s bags of room inside and the bonus of 1,660 litres of boot space.

Initially the RS6 will be available as an estate, but a saloon model will also be offered later this year.

However, most buyers will opt for the Avant, priced at £77,625. That’s pricey, but Audi will sell all 600 that it is importing into the UK.

For a car weighing more than two tonnes, the RS6’s performance figures are staggering – 0-62mph in 4.6 seconds and, when delimited from 155mph, a 175mph top speed.

Judging by the way the RS6 was accelerating hard at 150mph, I’d suggest that latter figure is a touch cautious.
Make no mistake, this is one awesome piece of kit.

The noise is tremendous, the surge in acceleration breathtaking and the handling surefooted and secure.

But the strange this is how accessible this car’s 572bhp is. You simply push the gearlever into drive, get a good grip on the wheel and floor the throttle.

The Quattro four-wheel drive system and a host of electronics keep this car well and truly planted on the road.

Even on a racetrack with all the safety systems switched off the RS6 would only plough into understeer under heavy provocation.

Never has such power been so easy to use.

The RS6 is a sledgehammer of a car wrapped in a very stylish set of clothes. It’s blisteringly fast yet utterly unflappable. Factor in the cult of an RS Avant, Audi’s build quality and the model’s exclusivity and you have the perfect hyper estate car.