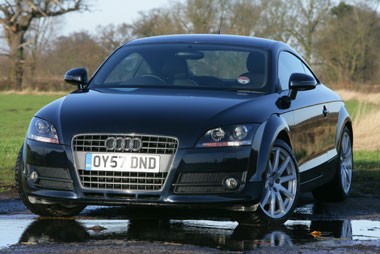 It is a mark of the desirability of Audi’s TT that its residual value prediction is still topping the magic 50% mark, in spite of used values dropping like stones.

That’s very impressive, and puts the TT in a very select club.

It demonstrates just how popular the TT is among both new and used car buyers.

Much of this is down to the high levels of quality in both the materials used and the construction of the car. Buyers know that a three-year-old TT will still feel solid and be squeak and rattle-free.

And for company buyers taking delivery of one, that high RV forecast translates into lower monthly rental rates.

Its financial performance makes it a tantalising prospect to offer to drivers.

However, its appeal will be limited to drivers who don’t have children because the rear seats are next to useless.

But for two people it is more than adequate.

Our tenure of the TT is coming to an end after 10 months and 14,000 miles and aside from buying some oil there has been no expenditure other than fuel.

With an average over those 14,000 miles of 33.2mpg the benefits of Audi’s lean-burn FSI injection technology have been proved.

Remember, this is a near-200bhp sports car.

The TT’s cabin remains a special place whenever you climb in.

There’s a reassuring snugness and solidity inside the TT.

And the performance has been enjoyable.

With nearly 200bhp, the TT’s revvy 2.0-litre turbo engine can play the part of willing accomplice or background com-panion, depending on your mood.

With the former it can be a screaming, torque-steering devil, while with the latter it can sit at subdued revs at motorway speeds.

Either way, you don’t tire of driving a TT.

The only downside was the TT being rear-ended.

This caused significant damage to the tailgate.

Although replaced and resprayed, the hatchback has never quite shut with the same solid thud that it did before.

And in the week that Audi rang to ask for its car back, the service indicator warning chimed up to demand some attention.

After 14,000 miles of occasional hard driving and little in the way of oil use, that is impressive.

And finally, a word of warning to any TT drivers out there. Twice we have been caught out by leaving the key on the tailgate ledge when we shut the tailgate.

Despite unlocking the doors beforehand, this closing action re-arms the central locking, leaving you stranded.

When a car is as good as the TT, you really want to be behind the wheel of it, not standing in a car park feeling stupid.