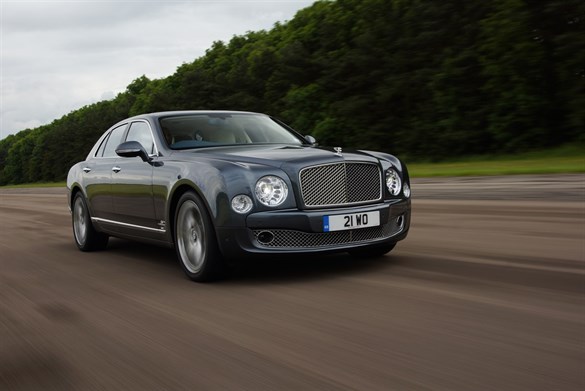 It’s not exactly a fleet staple, but for chairmen and CEOs who need to combine travel with work, preferably at the same time, the Bentley Mulsanne offers the perfect boardroom on wheels.

Spacious, sumptuous and supremely comfortable, the Mulsanne is also the VIP’s car of choice; hence its popularity with luxury hotels for chauffeuring their top clients.

A Bentley spokesman said: “There’s a whole sector of the community where there is a need for high end prestige cars, such as CEOs of major plcs. It’s a car where they can entertain, take guests to events and have a quiet working environment.

“There are also businesses that need these types of car for their top clients, such as prestige London hotels. It’s small volumes but it’s a still a very important part of the corporate market and it’s a big business decision for these businesses.”

However, are these CEOs and luxury hotels being left in the dark about the latest safety technology being developed by manufacturers?

The £226,000 Mulsanne surprisingly eschews many of the innovations already available on mass market family cars, including those of its Volkswagen Group parent company.

Yes, there’s a dashboard warning if you get too close to the car in front or appear to be travelling too quickly towards a slow or stationary object. But there’s no active braking system, no lane departure warning and no blindside indicators – standard equipment on many fleet cars. And there’s no stop-start to help you conserve fuel.

Does this matter when most of the miles in this car will be clocked up by a chauffeur, a professional driver who perhaps would feel insulted by the inclusion of safety features? Perhaps not, although Bentley says the owner often takes the wheel at weekends.

Why is Fleet News driving around in a Bentley luxo-barge, anyway? The press office called us out of the blue a few weeks ago to offer us a test drive.

After we picked up our collective jaws from the floor and reminded them about our core readership, they pointed to Bentley’s aspirations to grow its corporate business.

Well, far be it for us to trample on a company’s plans for a splash in fleet. We said yes, obviously.

Of course, the Mulsanne is not going to be replacing Ford or Vauxhall on any fleet choice lists, but it is a car chosen by chairman and chief executives at a number of large plcs.

Bentley tends to get a bit sniffy when asked about sales figures. It will admit to selling just over 1,000 Mulsanne’s globally last year and almost 600 in the first half of 2012, but is reluctant to disclose UK sales or corporate/private proportions.

As you’d expect of a car in the class, the quality of materials is excellent. Step into the back and you find a high floor, almost level with the sill, settle back into the seat and the choices begin. Pour yourself a drink, watch a DVD or pull down the wood panelled table attached to the seat in front to begin work.

We did none of those things. Instead, we slipped into the driver’s seat and turned the key. The 6.7-litre 505bhp V8 engine roars into life; it’s immensely powerful, capable of propelling this 2.5-tonne car from standstill to 62mph in just 5.3 seconds.

To do so is to leave a sizeable hole in your finances (admittedly not an issue for those who can afford this car in the first place – BIK is £2,635 a month). Fuel consumption, officially 16.7mpg combined, will quickly drop below 10mpg with overly enthusiastic driving.

However, ease off and 20mpg-plus is well within reach. We averaged 21mpg during our test week and peaked on a single journey – a mix of motorway and A-roads – at 25mpg.

For such a heavy, broad car, the rear-wheel drive Mulsanne handles amazingly well. The eight-speed auto gearbox is super-quick and incredibly smooth.

If that’s not enough, at the Paris motor show Bentley announced an ‘office pack’, priced £25,000, for twin iPads, two mini-desks, and mobile Wi-Fi link to the web.

Finally, if your company boss does plump for this car, they should prepare to become part of a ‘club’, one in which drivers of other Bentleys will wave in acknowledgement when coming in the opposite direction. Yes, it really did happen to us.