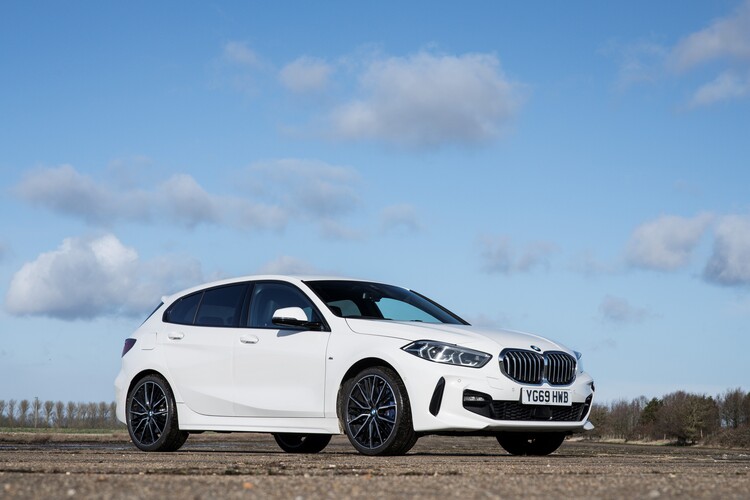 I’ll admit, I was a bit apprehensive about the 1 Series prior to its arrival. I thought the new generation model looked a bit ugly and I had concerns that the switch to front-wheel drive was going to make it a bit dull.

It turns out I had nothing to be worried about at all. Even the three-cylinder 1.5-litre petrol engine was stronger than I anticipated.

While not cheap, at £35,000, our test car was loaded to the hilt with options making it more akin to a 5 Series than a humble 1.

I made good use of the heated steering wheel during the winter months and found the electric tailgate and keyless entry to be particularly handy. These features come as part of the £1,500 Comfort Pack 2, which also includes electrically adjustable seats with a memory function.

Driveability is still one of the car’s best attributes. It can cruise along the motorway with the grace of a large saloon, but once you turn onto the back roads the 1 Series comes to life. The steering is direct and nicely weighted, giving you the confidence to make use of the grip levels.

The six-speed manual transmission adds to the driver engagement, although the clutch may be a tad heavy for some drivers.

If we ordered one now, however, the 150g/km WLTP figure would apply and we’d probably think again. While it’s a good engine, I believe the 118d would make a better choice for most company car drivers.

During our six months in the car we averaged 36mpg over some 5,000 miles – a way off the 46mpg quoted figure. I don’t doubt the car could achieve more, but it simply wouldn’t have been as much fun.

Infotainment is best in the business

BMW’s infotainment system was recently recognised as being the least distracting by car magazine WhatCar?, and I have to say it’s one of my favourite systems of the current crop.

It can be controlled via the touchscreen, where it offers Apple-grade response and functionality, using the traditional rotary controller (my personal favourite) or by voice. 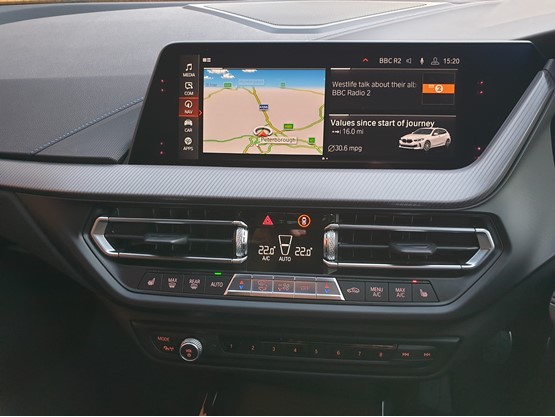 The voice command system recognises natural speech, so you don’t have to memorise and recite a bunch of phrases in a robotic monotone. Instead, simply say “Hey BMW, I’m Cold” or “play Craig David” and the system works out what you want and – for the most part – gets it right.

Our car’s optional Technology 2 package (£1,500) increases the size of the infotainment screen from 8.8 inches to 10.25 and adds enhanced connected services, including real-time traffic, map updates and remote connectivity via the BMW app.

Using the app I can see the car’s location on a map and remotely lock or unlock it. A round-the-clock concierge service is also provided. It can even help you find available parking spaces.

Firm ride takes some getting used to

Sporty trim levels seem to be the most popular with UK company car drivers and with the BMW 1 Series that is certainly the case.

Currently 58% of 1 Series sold in the UK are in the M Sport trim, which features aggressive styling, larger alloy wheels and firmer suspension.

The ride height is 10mm lower than standard, giving the car a more aggressive stance. Our car is enhanced further by 19-inch alloy wheels, as part of the optional £1,800 M Sport Plus package.

When I took delivery of the car the first thought that came to mind was: “blimey the ride’s a bit firm”. Now, I’m not too bothered by a harder-riding car. On the right road the 1 Series is enjoyable and it feels more planted on the motorway. In short, the car handles brilliantly – it has very quick and direct steering, helped by plenty of grip.

My dog, however, isn’t such a big fan. If I take him out in the car it usually results in him being sick. The ride in the 1 Series is very jiggly. On rough road surfaces it does give your back a bit of a pounding, which is less than ideal. 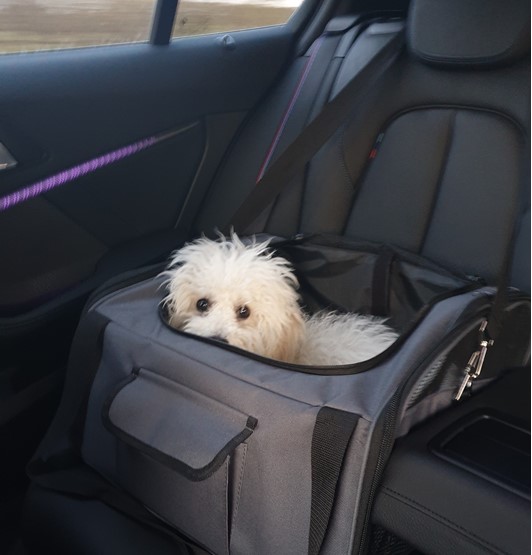 I’ve also noticed those big alloys tend to dig into grooves on the motorway and cause the car to tramline. For the first few days I though the car had an over-aggressive lane-keeping assist system!

If I were to configure a 1 Series again, I’d think carefully about opting for the larger wheels.

Another feature of the aforementioned M Sport Plus pack that’s worth highlighting is the BMW M Sport brake upgrade. This adds larger calipers, finished in metallic blue, and larger front discs.

Stopping power is immense. A similar setup is used on the Mini Clubman JCW, which has more than double the power of our 118i.

Adaptive dampers are optionally available on the 118d and 120d, but not the 118i. For £500 these enable the driver to soften or firm up the ride to suit their requirements.

We were impressed by the system on our previous 520d long-termer.

Is it better than Mercedes A-Class?

Having stolen the Best Compact Premium car title from its keenest rival, the Mercedes-Benz A Class, at the 2020 Fleet News Awards, we thought it best to get the two together and see how they compare.

If we based the judging on looks alone then the A Class would win hands down. It’s sleek, sophisticated and wears its three-pointed-star with pride.

The BMW, meanwhile, is a bit bulbous. It has ridiculous oversized radiator grilles and lacks the dignified posture of its key rival. 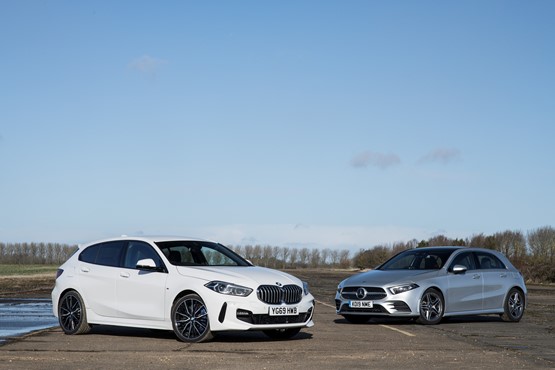 Delve more than skin-deep, however, and the BMW starts to come into its own.

Interior quality is miles ahead in the BMW. While the Mercedes has a modern and crisp dashboard, it just doesn’t feel as robust as the 1 Series. The BMW’s infotainment system is also better. It’s easier to use thanks to a rotary controller, while the Mercedes features a fiddly a touchpad like you’ll find on a laptop.

Pricing and specifications are largely aligned, although the entry-level A 180 d is more efficient that BMW’s equivalent 116d.

Our 118i M Sport compares with the A 180 AMG Line, which offers similar performance, emissions and spec.

BMW offers a wider range of options than Mercedes, with features such as a heated steering wheel and electric tailgate available on the 1 Series.

Both models are enjoyable to drive, although the BMW ekes ahead again despite switching from rear- to front-wheel-drive. The 1 Series is more engaging, with precise steering and a firmer ride. In the A Class things a more relaxed and the suspension irons out the bumps a little bit better.

Mercedes does have one trump card in that the A Class is now available as a plug-in hybrid. We’ll be adding one to our fleet in the coming months, so it remains to be seen whether the A Class can claw back its crown.

Achieving the BMW’s claimed fuel economy of 42-46mpg is proving a challenge for me, cementing my belief that the seemingly massive shift away from diesel is perhaps premature.

The best economy figure I’ve seen from the car’s on-board readout is 38.8mpg on a sedate cruise from Peterborough to Coventry and since we took delivery of the vehicle in November, it’s averaged 35mpg over about 2,000 miles.

I spent a week doing nothing but short urban trips – something we’re told diesels are bad at – but the 118i fared worse, returning just 25.7mpg. 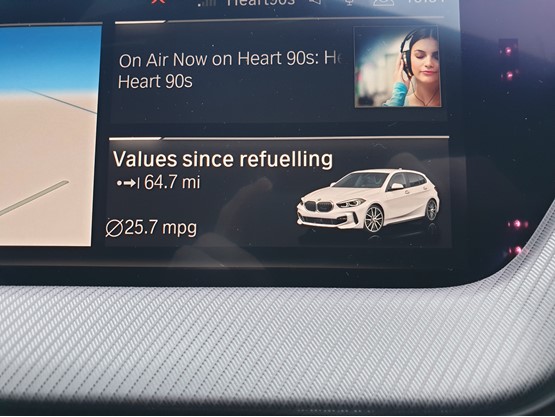 A colleague managed to squeeze 44.7mpg out of one journey in the car, but achieving it required considerable focus on efficient driving. On motorway journeys even large diesels can perform better than that.

The current 1 Series range offers three diesel engines; a 116PS 116d, a 150PS 118d and a soon-to-be-released 190PS 120d. These vehicles promise much better efficiency of up to 60mpg and, crucially, lower CO2 emissions.

Our car’s modest 1.5-litre three-cylinder petrol engine has a WLTP CO2 emissions figure of 151g/km, boosted, in part, by its lengthy option list.

Were it to be registered after April 1 – as many ordered from now are likely to be – it would be placed in the 33% benefit-in-kind tax band.

In contrast, the RDE2-compliant 116d will find itself in the 27% bracket.

The 118d, which offers an identical 8.5-second 0-62mph acceleration time to our 118i, will slot into the 32% band – although BMW says it is working towards making all its models RDE2-compliant by Spring, in which case it would fall to 28%.

We’d say the 118d is the pick of the bunch. Drivers might face slightly higher tax bills but they’ll save on personal mileage and the 2.0-litre powertrain has a healthy dose of torque and excellent refinement.

Interior is upmarket and robust

Downsizing from a Mercedes E Class into the 1 Series has been a mixed experience. I miss the road presence, refinement and passenger space of the big saloon, but I’m enjoying the 1 Series’ nimble chassis and smaller footprint.

Parking is easier, helped by the car’s all-around parking sensors and rear-view camera.

It also doesn’t feel as much of a downgrade as you might expect inside, either. The new 1 Series borrows much of its interior from the bigger 3, so it feels upmarket and robust. 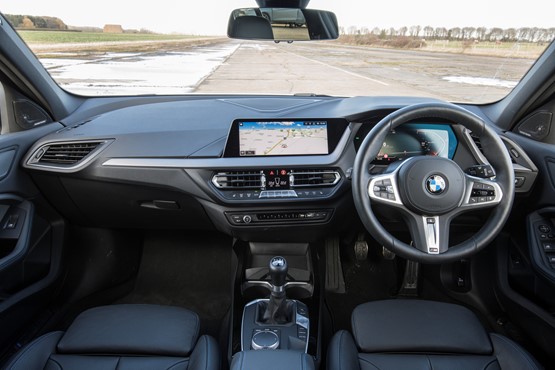 The seats are comfortable and supportive, as well as being – crucially – heated. There is also a memory function on the electric adjustment which remembers my seating and mirror positions after others have borrowed the car.

Sitting behind the digital instruments, with a head-up display and the chunky leather-wrapped steering wheel, you’d be forgiven for thinking you were in an executive saloon.

This is factor because, as company car tax becomes more punitive, those who stay in the company car system may be pressured into cars in the segment below.

For me, it’s no hardship. Whether on the motorway or pootling around town, the 1 Series is proving to be a fine motor.

BMW has introduced a fairly radical change on the latest 1 Series, ditching its USP rear-drive layout for a mainstream front-wheel drive setup. It’s a bold move for a vehicle that is as important to the fleet sector as the ubiquitous 3 Series.

The upshot of the change is a more spacious interior and boot, making it a more desirable company car. While the new car no longer has the precision of its predecessor, we expect the layout will be better suited to most drivers.

Our test model is a 118i, which makes use of a 1.5-litre three-cylinder petrol engine. It has an output of 140PS and CO2 emissions (as specified) of 123g/km. Fuel economy, under WLTP, is rated at 44.1mpg. Finished in M Sport trim, our Alpine White car looks striking with its deep bumpers and gloss black detailing. 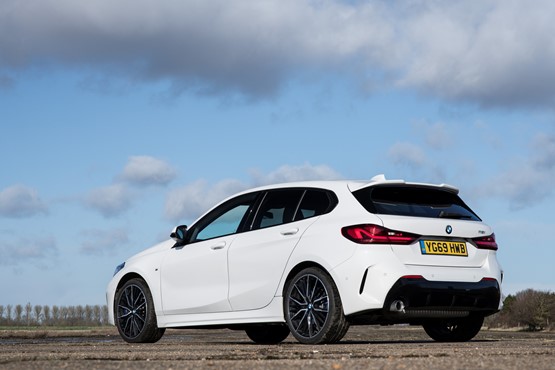 The features add around £8,000 to the car’s £26,155 starting price. We’ll let you know how many of them are really necessary in due course.