"The combination of firmness for engaging, sharp handling on meandering roads with the suppleness and comfort to cushion the roughest of ruts is, frankly, engineering genius." 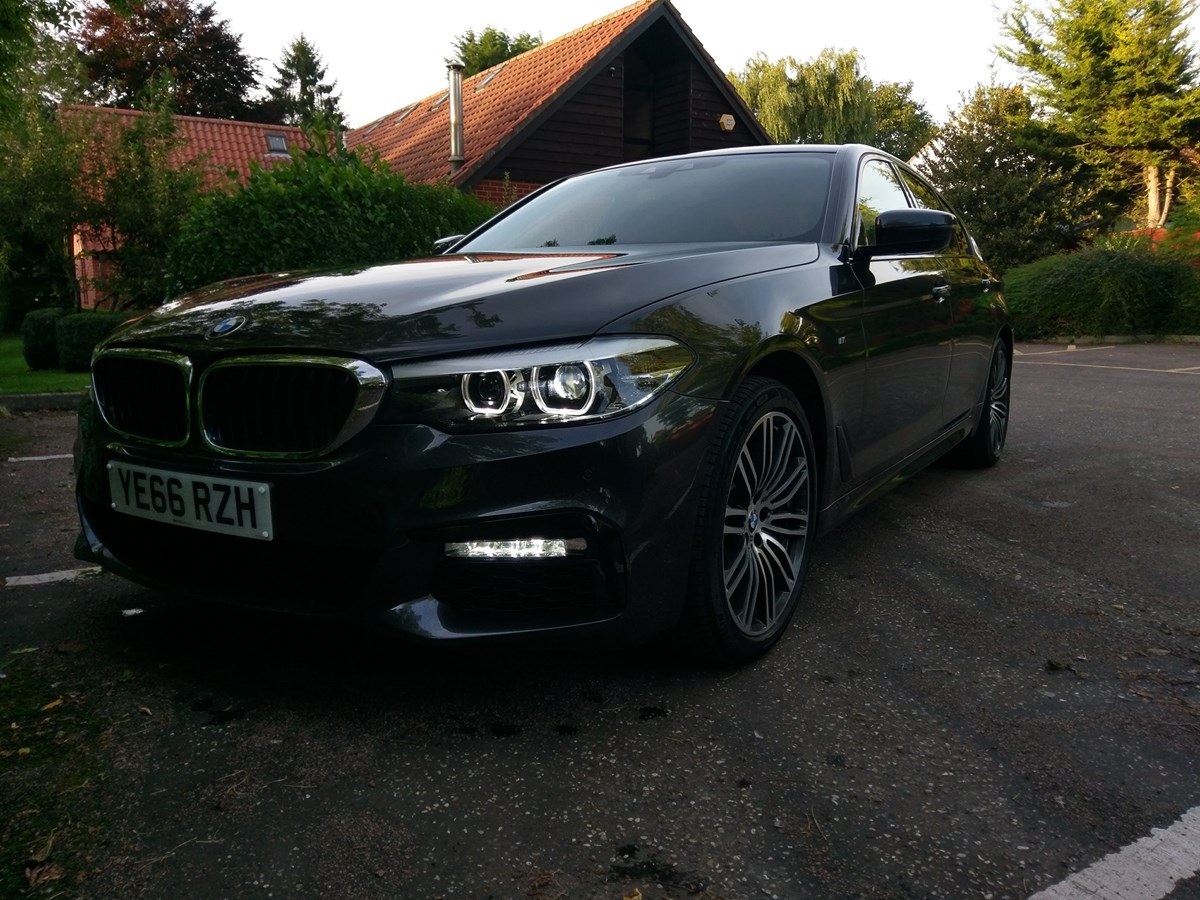 Sad as I am to wave goodbye to our brilliant 5 Series, at least my pockets are not bulging as much. Let me explain…

We opted for the Technology package, a £1,245 extra, which includes head-up display, wireless charging, gesture control for the touchscreen and Wi-Fi hotspot. It also comes with Display Key (note the caps).

In addition to the conventional functionality (lock/unlock/start the car), this ‘super key’ has a coloured LCD touchscreen which shows whether the vehicle is secured (doors, windows and alarm) and remaining fuel range via the BMW Connected app. 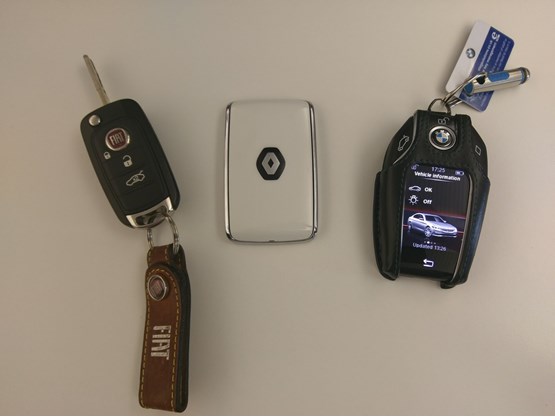 However, if you’re halfway to London on the train, you can’t remotely lock the car unless you have the £60 phone app.

The best function is the ability to remotely set the temperature, either instantly or on a timer.

For an additional £395, you can add a remote parking feature (we didn’t). This allows you to park the car while standing outside.

The car can only move in a straight line and it should only be used when parking in garages rather than getting too close to another parked car.

While some question whether this is technology nobody asked for (doesn’t most technology fit this description?), it is a talking point.

However, the 2.2-inch screen is bulky, hence the bulging pockets. A smartphone app would surely be a better solution.

During its time with us, the 5 Series has averaged mid-40s mpg. That is slightly better than the comparable Mercedes-Benz E-Class we tested for a week (42mpg) but not as good as our Jaguar XF long-termer (52mpg).

Performance has been faultless, as noted in previous reviews.

For the settings, comfort means comfort and sport means sport (weightier steering, firmer suspension, more responsive gearbox), or hit the adaptive button and the car adjusts according to the road ahead.

There are minor niggles – for example, you have to hold the boot release button down for too long; the XF is a quick press – but, for us, the 5 Series is the clear sector leader.

We’ll have to wait a few weeks to find out if the Fleet News Awards judges concur.

The BMW 5 series' seats have made Stephen Briers rethink his glowing company car review of the Jaguar XF.

Oooh, ahhh… my first reaction upon sliding behind the wheel of the BMW 5 Series.

Having driven the Jaguar XF for the past couple of months, I’d previously commented on the Jag’s supportive front seats, with excellent lumbar and side support.

The 5 Series has made me rethink that glowing review. Its seats are magnificent: snugly sitting between the bolstered side supports, you sink into the leather like you would your favourite armchair.

Farewell to backaches, this is definitely the car for the high mileage driver.

BMW has gone tech-extreme with the latest 5 Series.

It is packed with interactive entertainment. Some of it is outstanding, such as the optional voice-activated control, which even deciphers my West County brogue.

For a Fleet News event: “Navigate to Capital Boulevard (Boulevarrrrrd) West, Leeds”. The address is repeated back (with fewer ‘r’ inflections) and a final request to “say yes to set”. Brilliant.

Slightly less brilliant is BMW’s crazy notion that controlling radio volume by taking your left hand off the wheel to spin in a circular motion in front of the 10.25-inch screen – clockwise to increase volume, anti-clockwise to reduce – is a good idea.

First, your hand leaves the steering wheel; second, your eyes leave the road to check that your finger waggle is activating the volume (it doesn’t all the time).

Fine for passengers to mess with but, in our opinion, steering wheel controls are as safe as it gets (the 5 Series has them as well) and should be left alone.

I haven’t delved fully into all the technology yet, but colleagues are waxing lyrical about their experiences.

The ability to change the interior lighting to myriad colours seems particularly popular. 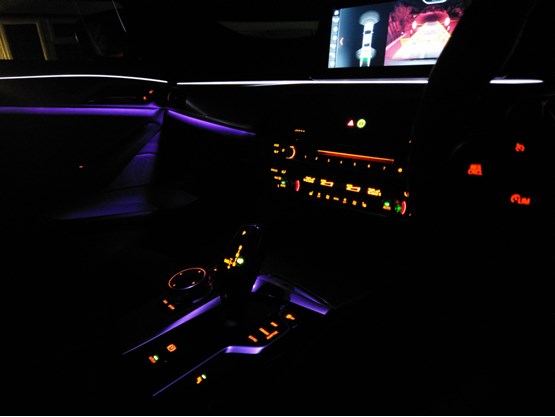 I can certainly wax lyrical about the driving experience: it’s stunning, almost miraculous.

How the car combines the firmness for engaging, sharp handling on meandering roads with the suppleness and comfort to cushion the roughest of ruts is, frankly, engineering genius.

I was fortunate to have driven the latest BMW 520d at its European launch event in Spain in February this year, and it was clear then that it was an excellent car.

Having now driven our long-term car for around 2,000 miles on UK roads, I’m happy to report my initial impressions have proved to be correct.

Its comfort and driving experience continue to impress, and it is also proving to be relatively efficient.

I’m achieving 45.5mpg from each tank of diesel, compared to the official combined figure of 65.7mpg.

However, I had forgotten how big it is. My previous long-term test car was our Ford S-Max seven-seat people carrier so I’ve been used to large cars, but at 4.94m the 5-Series is around 14cm longer.

The long bonnet, saloon bodystyle and lower driving position also means visibility is worse, making parking more of a chore, but the front and rear parking sensors, as well as the reversing camera fitted to our test model, help.

However, this is not a car I’ll be taking in a tight, multi-storey car park any time soon.

On the positive side, its size means there’s masses of room inside and this adds to the sense of occasion you experience when driving or riding in the car.

One of the drawbacks of operating a saloon is that the usefulness of the boot is reduced. Access to the space is restricted, making it more difficult to load and unload cargo.

The 520d does suffer from this, but the versatility of our test car is improved through the addition of the optional split rear-folding rear seats (£335).

While these don’t provide a flat loading space, they do improve its versatility.

Recently, it meant I could easily carry a passenger, two sets of golf clubs and trolleys, whereas without the folding seats one of the bags would have had to ride on the rear seat.

We’ve been averaging around 45mpg in our long-term BMW 520d M Sport, but its Eco Pro driving mode may improve that.

This does a number of things to boost efficiency.

The most obvious one is that the dials on the instrument panel turn pale blue and the rev counter is replaced by a real-time fuel economy gauge. 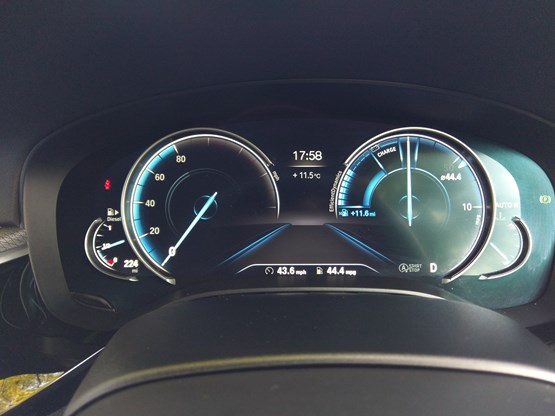 It also displays driver advice prompts such as by using sat-nav it advises to lift off the accelerator when approaching either a roundabout or an area with a lower speed limit to cut fuel use.

Less visual, but also important, are the changes to the car’s driving dynamics.

The throttle response becomes less sensitive, while the point when gear changes occur is also optimised.

Who knew a button could make so much difference? I’ll admit I was slightly underwhelmed by the 5 Series when it arrived.

Not for its looks or build quality or technical excellence, but for the way it drove.

I saw this behemoth of a vehicle with its 19-inch alloy wheels, M Sport body kit and ‘get out my way’ intimidating stance and thought it would deliver a top-drawer driving experience.

Let’s not forget this is supposed to be the ultimate driving machine.

On the motorway it is perfect.

It wafts like a 7 Series, giving the driver complete isolation from the outside world.

The ride is as smooth as silk and it deposits you gracefully in a refreshed state, no matter how many miles you’ve clocked up.

When you get to the country lanes, however, things are less impressive.

The steering feels numb and the whole car rolls into corners in a less satisfying manner.

Not the experience I was expecting from such a high-value vehicle with performance intentions.

Next to the gear lever is a switch offering four options: Eco Pro, Comfort (default), Adaptive and Sport.

Usually I would disregard these settings as they are often little more than a gimmick on mainstream cars.

But our car is fitted with optional adaptive dampers (£985) and these settings make the world of difference.

In Sport, the whole car hunkers down, the steering weights up and the gearbox becomes more responsive.

The 5 Series transforms into the car I expected it to be. The body roll disappears and it feels like you are in something much smaller.

When you’ve had your fun, switch back to comfort and soak up the miles, or choose Adaptive and the car will adjust according to the road ahead. As for Eco Pro… more on this next time. 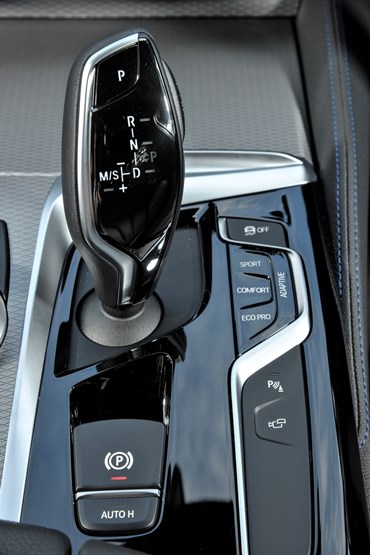 BMW says the seventh generation 5 Series is more refined than ever, but this is a car that has always been championed for its driving experience.

So is the 5 Series still the ‘ultimate driving machine’?

Around 60% of fleet customers are expected to make the £3,000 upgrade, so we’ve chosen this model for our 520d test car.

But, crucially, its costs are almost perfectly aligned with the Mercedes-Benz E220d AMG line – its biggest rival.

Our car is fitted with the Technology Package (£1,495) which includes Display Key.

This smartphone-like device can show the remaining fuel range and activate the climate control system.

The pack also features Gesture Control, allowing operation of the infotainment system by simply waving your hands in front of it.

As the 5 Series promises to balance driver engagement with refinement, Variable Damper Control (£985) should give us the best chance of experiencing both characteristics.

One box which remained un-ticked was the Driver Assistance Plus package, which offers a semi-autonomous driving ability.

At £2,250, it’s expensive – considering similar technology is standard on the Volvo S90 – and we want to get to grips with the 5 Series without intervention.

Having only covered a few hundred miles in the car I’ll save my analysis for the next report.

First impressions are positive; the car has averaged just more than 40mpg so far and managed 60.4mpg on my first commute. 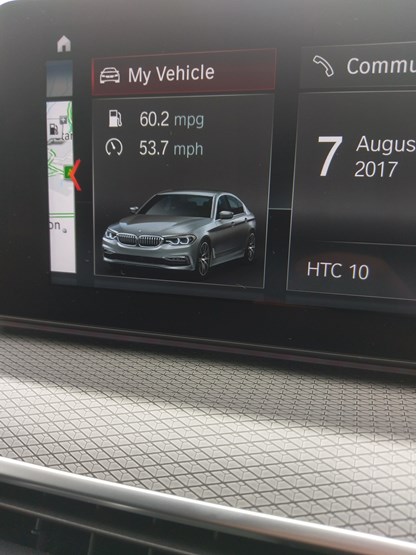