Jaguar XF Sportbrake first drive | is it a segment leader?

"Its steering is especially responsive, but this can make the car feel fidgety on the motorway" 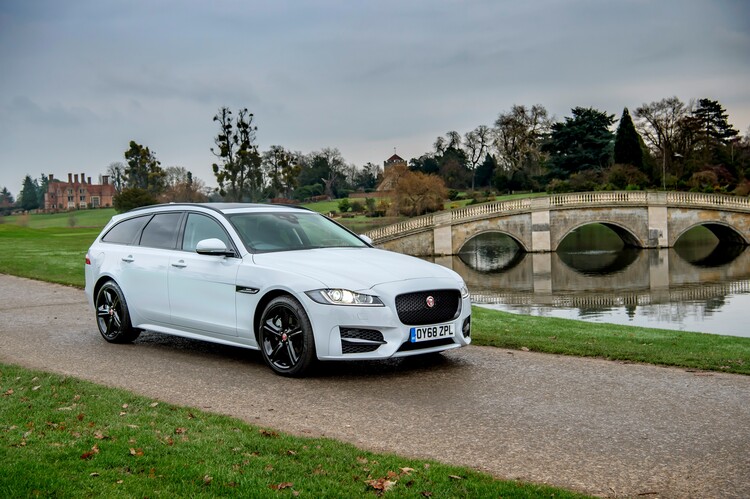 Jaguar offers two options for those that need a premium car with bit of load lugging capability: the XF Sportbrake and the F-Pace.

On paper, both provide similar levels of boot space and performance for roughly the same price.

While the F-Pace is among the better-handling SUVs currently available, for pure driver enjoyment the XF is the better bet.

Its sleeker styling means it burns less fuel too.

However, the popularity of SUVs at the moment means the higher-riding F-Pace carriers stronger residuals than its stablemate, meaning it has lower whole life costs.

Estate cars may have fallen out of favour somewhat in the last few years, but the reality is they often make more sense than an SUV, especially for a company car driver.

Associated costs, such as tyres, are lower and refinement and ride quality is better.

The XF’s segment is highly competitive. It battles with the BMW 5 Series, Mercedes E Class, Audi A6 and Volvo V90. All are brilliant, efficient, fast and well equipped.

When it comes to boot space, the XF loses out to the Mercedes for outright volume, but competes with its other rivals.

There is almost two metres of load length if you fold the seats down and a low loading height makes the XF especially practical when compared to an SUV.

Our test car was fitted with all-wheel-drive, which saps power and decreases efficiency – we struggled to get more than 38mpg.

While we appreciate the additional stability provided in less favourable conditions, the costs just don’t weigh up for most users and a cheaper rear-drive XF should suffice

The XF also comes with an inordinately long options list, where even features such as lumbar support are costly extras.

We can’t fault the XF’s handling, although its diesel motor feels a little lethargic and noisy compared to the unit in a 5 Series – harming overall driveability.

Even in R-Sport trim comfort levels are high. There is little noise intrusion and the XF glides along. Its steering is especially responsive, although this can make the car feel fidgety on the motorway.

Is the XF Sportbrake the best estate in the segment? No, we can ignore the lower running costs of rivals, even with the new model’s RDE2 compliance. If a driver wants a Jag then they won’t be disappointed, but if they want the best luxury estate then they’ll need to choose an E-Class.