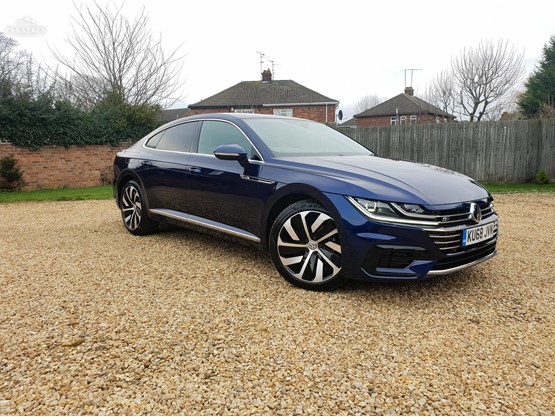 Every now and again a car comes along that just fits right, and for me the Volkswagen Arteon has really ticked all the boxes during its six-month test.

I immediately fell for its distinctive looks when it was revealed as the successor to the CC back in 2017 and it lived up to expectations when I drove it at the European launch later that year.

The fastback design adds practicality over the Passat, on which the car is based, and there are enough unique styling details to set the Arteon apart; such as the frameless doors, clamshell bonnet and coupe-like roofline.

During our time with car I really started to appreciate its space, comfort and effortless driveability.

CO2 emissions of 121g/km are competitive, giving a monthly BIK figure of around £200.

The driver assistance systems work well with little intrusion and handy features such as the adaptive headlights that automatically adjust to the road ahead based on the satnav map are usually costly options on other cars.

With around 8,000 miles added to the car’s odometer, it would happily return 47mpg between fill-ups. On a few trips it even managed to exceed 60mpg.

There are acres of cabin space and a 560-litre boot, meaning the Arteon can put crossovers to shame, carrying five adults and their luggage with no complaints.

While handling isn’t the sharpest and the engine could do with another layer of sound-proofing, I would have no reservations in recommending the car as a great fleet choice.

We’ve praised the Arteon for its space, looks and efficiency in recent months, but it’s time to level the playing field and talk about the car’s foibles.

At £38,000, the Arteon 190 TDI R Line represents good value when considered against an executive car like the BMW 5 Series or Audi A6. But, compared with mainstream rivals like the Ford Mondeo, Vauxhall Insignia or Skoda Superb, it’s not exactly a bargain.

In order to justify the price, VW has loaded the car with features. During our testing, however, we’ve found that the ‘perfect’ Arteon may require a few more options. 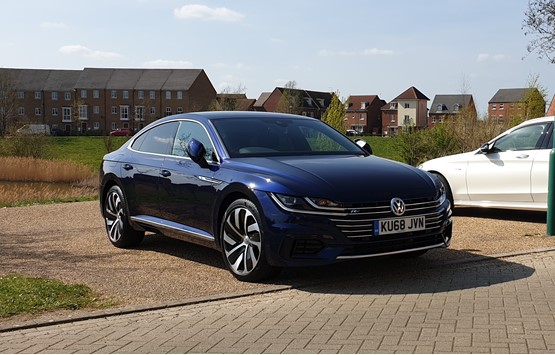 Living with it for the past five months and 6,000 miles has been largely stress free, although having been in-and-out of cars equipped with keyless entry the need to unlock the Arteon with its keyfob has become irritating.

The fob itself is rather swish. There’s no actual key, just a couple of buttons with some weighty chrome trim. All Arteons have push button start, so, once inside, the key is not needed.

Of course, keyless entry is available as an option. It costs £480, or £920 if you want it with an electric tailgate.

The next gripe is a lack of USB sockets. There is only one in the whole car (located in the front armrest), which means passengers need to take it turns to charge their phones.

If you want to use the Android Auto or Apple Car Play features then others will have no hope.

Adding an extra socket costs £900 as it requires the upgraded ‘Discover Pro’ infotainment system, rather than the standard-fit unit. On top of the additional socket, you’ll get a larger 9.2-inch display and voice activation.

Despite coming with a plethora of safety technology, including adaptive cruise control as standard, there is no reversing camera, which makes reversing this 4.8-metre car a bit more of a challenge.

Fortunately, parking sensors at the front and rear do come as standard.

Again, one can tick a box on the order form to add the feature; but it costs an additional £330 for a normal rear-view camera or £800 for a surround-view system.

Rear legroom is extremely generous in the Arteon, but the sloping coupe-like roof means taller passengers may find the rear headroom less accommodating than in a similarly sized executive car.

Diesel refinement has come a long way, but the recent influx of electrified cars coupled with the rise of petrol models has made the noise from a diesel engine all the more obvious.

The Arteon’s engine note is a little more intrusive at lower speeds than we were expecting. It doesn’t make the traditional diesel gurgle, but under acceleration there is a coarse noise that is noticeable until you reach about 40mph.

I can’t fault the Arteon’s fuel consumption though, which is still far better than the official WLTP figure (48-50) on longer runs – at almost 60mpg.

It’s easy to overlook safety in a world where, seemingly, every car gets a five-star rating. But, our VW Arteon sits among just a handful of cars that achieved an almost perfect Euro NCAP score for occupant protection.

Tested in 2017, the Arteon was awarded 96%. Since then, only five other cars have managed a higher number. Volvo’s XC60 leads the pack with 98%.

It is also one of the highest-scoring cars for pedestrian protection, with an 85% score.

The Arteon is one of the most advanced cars when it comes to driver assistance. As part of its arsenal of safety tech, it features autonomous emergency braking with pedestrian detection, which can apply the brakes if it senses an imminent collision – either in the city or at higher speeds. There is also lane assist, which actively applies steering inputs to keep the car centered in-lane.

The assistance systems are linked to the sat-nav map and the car can automatically slow down for tight bends and roundabout.

In the event of a possible collision, the car is able to tighten the seatbelts and close the windows.

Emergency assist (a £550 option) can even pull the car over to the side of the road and apply the hazard warning lights, should the driver become incapacitated. 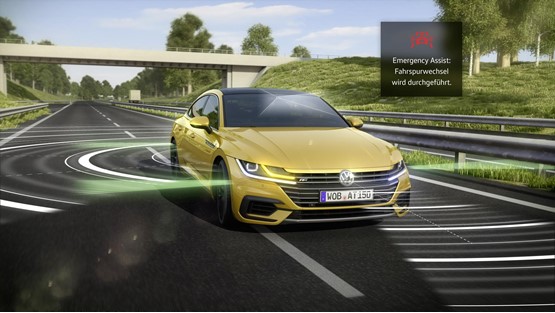 Often an array of assistance systems can become disruptive to the driver and, in some cases, they are simply switched off. In the Arteon the systems are well calibrated and unintrusive, in fact, it’s the only car I’ve driven that I’ve kept the lane-keeping aid switched on during everyday driving.

With all the tech enabled, the Arteon is a sublime motorway cruiser and makes long-distance travel a joy.

When I drove the Volkswagen Arteon at its European press launch more than a year ago, I thought it would be an excellent car to live with on a long-term basis.

After three months and more than 4,000 miles behind the wheel of our test model, I’m pleased to say that I was right.

It’s just such an easy car drive. From its ErgoComfort seats, which make long journeys a pleasure, to its standard-fit adaptive cruise control and lane keep assist – the whole package is just perfectly suited to modern day motoring.

The R Line trim gives the Arteon a sportier edge, without ruining the ride comfort.

It’s not as adept in the corners as a BMW 3 Series, but, given the car’s extra bulk, we’d say that was an unfair benchmark.

The infotainment system is the same one that is used across the VW range. It’s easy to use and provides good sound quality.

It offers live traffic updates via an online connection and you can link to car to VW’s smartphone app, which logs each journey and can pinpoint the car’s location on a map.

Since taking delivery of the car, it has averaged 48.9mpg. Many of my journeys are shorter than five miles, but longer trips are seeing in excess of 58mpg.

I’m just about getting used to the attention that the Arteon’s striking looks attract as I go about my day-to-day business.

It all started a couple of days after the car arrived when a friendly middle-aged couple approached me in a supermarket car park giving the ‘thumbs-up’ and asking what it was.

I’ve lost count of the nods of approval from other motorists and admiring glances the car gets from passers-by. It really is like being in an ‘exclusive’ club, despite its mainstream pricing.

The sleek coupe-like body oozes class, while its distinctive front end sets it apart from the rest of VW’s line up.

In R-Line trim, our test car’s 19-inch wheels and deeper front bumper give a smarter look than cheaper Elegance models.

At night, the car continues to stand out with its four LED headlights and sweeping running lights creating a unique signature. 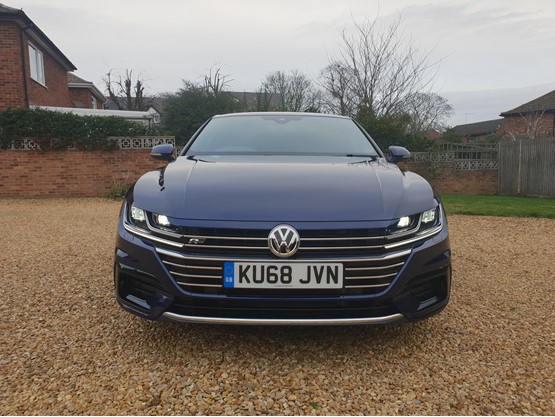 Having driven a large array of ‘premium-badge’ cars over the last few years, none has managed to attract anywhere near the amount of positive attention that the Arteon does.

In fact, certain cars seem to have the opposite effect with other motorists exhibiting more hostile driving behaviour towards them.

Prices start at a little over £31,000 and leasing costs are currently very favourable. Combined with the Arteon’s excellent practicality and efficiency, the package is hard to ignore.

When Volkswagen launched the Passat CC 10 years ago it offered company car drivers the opportunity to get something a bit bigger and better equipped for less money than the equivalent BMW 3 Series or Audi A4.

With the Arteon, VW have gone even further giving it more distinctive looks, even more space and now the added practicality of a hatchback.

There is more boot space (560 litres) than in a car from the class above and rear legroom is also a match for much larger and more expensive cars. 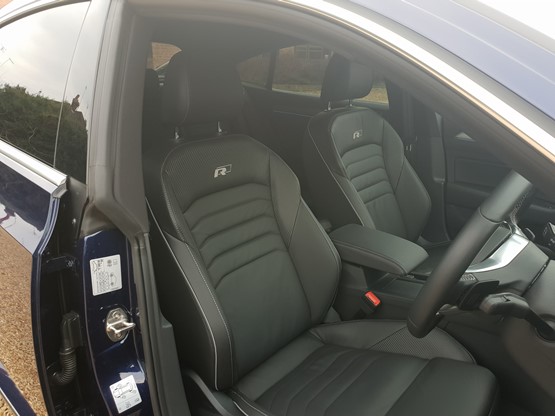 We chose the 190PS diesel engine for its balance of performance and promise of 61mpg.

With 400Nm of torque it can accelerate from 0-62mph in eight seconds. A seven speed DSG gearbox comes as standard, giving CO2 emissions of 121g/km.

A company car driver would pay around £180 (20% taxpayer) per month in Benefit-in-kind tax for this model, with the cheapest Arteon coming in at around £150 per month (1.5 TSI Elegance).

We’ve already racked up almost 3,000 miles in our car, achieving an average of 52mpg. Now it’s loosened up, exceeding 60mpg has been easily achievable on individual journeys and we look forward to the figure getting better as the weather warms up.