""On the road the car balances smoothness and agility better than anything else in the sector."" 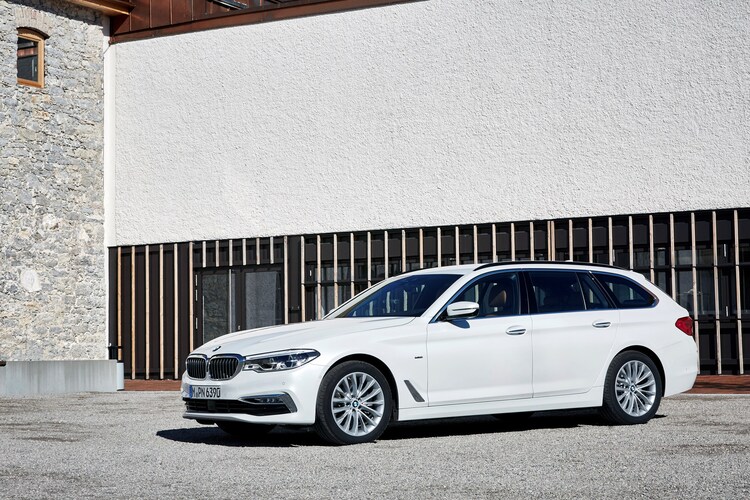 BMW’s 5 Series is ageing very well indeed. It’s now in its seventh generation and has become more intelligent and more refined. We have already been won over by the saloon – which launched earlier in the year – and the Touring model continues to carry the torch, bringing added practicality to the mix.

Load capacity is what really matters in this sector and the 5 Series Touring now has 570 litres of space to offer – that’s 10 litres more than the outgoing model.

Boot access is easy thanks to a standard-fit electrically-operated tailgate. If more space is required the 40:20:40 split rear seats can be folded at the touch of a button.

While it can’t quite match the vastness of the Mercedes-Benz E-Class Estate (640 litres) it manages to just eke ahead of the Volvo V90 and Audi A6 in load-lugging.

During development of the estate, BMW’s engineers had one clear objective: the car must offer customers the same level of refinement and driving dynamics as the saloon.

On the road the car balances smoothness and agility better than anything else in the sector. We struggled to unsettle the ride on the roads of Munich and we have no doubt the car will outperform rivals when it lands in the UK.

BMW’s efforts to increase comfort are realised through a lack of road noise, even at autobahn speeds. With a full suite of clever driver-assistance systems looking after speed, braking and steering the driver can sink into the massaging seats and enjoy an effortless cruise.

You could go as far as to say the 5 Series has become a little bit too refined. Even in sport mode the car feels silky smooth and hushed which may put enthusiastic drivers off.

Powertrain options are restricted to two petrol and two diesel units, although pretty much everyone opts for the 2.0-litre diesel as it is the cheapest and most efficient.

More popular M Sport versions are priced from £41,370 and have a 5g/km emissions penalty due to larger wheels.

Those wanting more power can opt for the 530d but the uplift in both price (£46,285) and benefit-in-kind tax (£429 per month) is significant. Despite its satisfying torque surge, the extra performance just isn’t worth the extra cost.

Due to packaging constraints, it’s unlikely we will see a plug-in version of the Touring, so the 3.0-litre petrol 540i completes the UK line up.

Verdict: The 5 Series Touring is not only a credible contender in the luxury estate market but also begs the question as to why one would opt for an SUV – especially as xDrive four-wheel-drive is available on the larger engine cars.