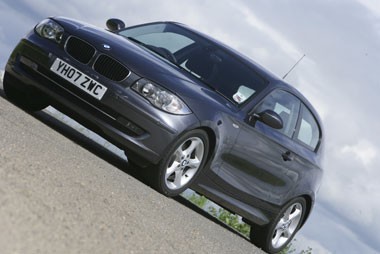 It’s nice to see that the estimable judges of the Fleet News Awards think the same as I do about the BMW 1 Series.

They reckoned it was the best in its class too.

Over the past few months of running the 120d though, I’ve encountered quite a few people who think differently and reckon the merits of the Audi A3 outweigh the BMW.

I can see where they are coming from.

For a start, the A3 is a better-looking car, and there’s more space in it too, although that’s an area neither car exactly excels in.

And it has a cheaper front-end price as well.

But I reckon that those who prefer the Audi have never driven a 120d, because it’s here that the BMW excels, and the A3 starts to feel the pressure.

The cabin of the 1 Series is an utter delight, and with its impending departure back to the good people of Bracknell I know I’m going to miss the feeling of reassuring thickness that comes with everything in it, from the steering wheel to the door bins.

I had an A3 a couple of months back and while the Audi looks good inside, it just doesn’t have the same feeling of indestructibility as the 1 Series.

It had been a while since I’d driven an A3 and I was surprised at the difference between the two.

I get the impression the BMW would feel no different after 60,000 miles.

In terms of interior build quality, its compact size is an advantage.

Any large cost-saving sheets of cheap plastic are kept to a minimum and you are hemmed in by firm but not hard materials.

In terms of handling, the BMW can’t be touched either but for most drivers that is an irrelevance.

The ride quality is more important and, between the two, they’re both equally as unyielding, especially with our car’s optional sports suspension.

Choosing either of these cars is not for those of a princess and the pea mentality.

The 1 Series is also unbeatable (and this is why it picked up its gong) in the combination of power and emissions.

That equates to nigh-on 60mpg on the official cycle, which in 12,500 miles has resulted in a real-life average of 50mpg.

These are amazing figures and form the bedrock of BMW’s fleet offering these days.

It makes it a mouth-watering choice between it and the lower power (137bhp) and higher-emitting (143g/km) A3 2.0 TDI, but which also comes with more equipment as standard.

I’ll concede it is close between these two giants and it’s no surprise that in this premium lower-medium sector no other car gets a look in.

However, for me it has to be the BMW because at its core the 120d is a great car: perfect driving position, quality, power, performance, handling, reliability and economy.
I’m going to miss driving it.