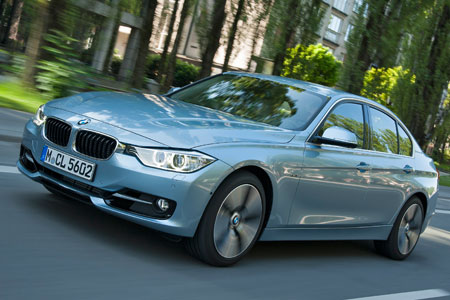 BMW’s latest high-performance version of the 3 Series (the M3 is a little while in the future yet) is also one of its most fuel efficient.

For a handful of urban-based user-choosers, or those with a particular aversion to diesel engines, there is now a high-performance petrol-electric hybrid in the BMW ActiveHybrid 3.

It uses the twin-turbo 3.0-litre six-cylinder engine used in other BMW models (producing 306bhp), with a battery-powered electric motor producing enough power for a total system output of 340bhp.

The extra power and substantial torque allows the ActiveHybrid3 to accelerate from 0-62mph in 5.3 seconds, two-tenths faster than a 335i.

The car uses the same impressive eight-speed automatic transmission as other BMW models, and doesn’t really have any competition when it comes to its impressive performance in relation to its fuel efficiency and CO2 emissions.

As the 3 Series is still relatively new, not all engine variants have arrived on the market yet, so while there is likely to be a twin-turbo diesel 335d at some stage in the near future, the 340bhp ActiveHybrid 3 seems to substantially outgun current diesel rivals from Audi (the 245bhp A4 3.0 TDI Quattro) and Mercedes-Benz (the 265bhp C350 CDI).

So why does BMW reckon only 100 of these cars will find homes in the UK each year? Well it isn’t cheap, with prices starting at £40,225 OTR for the entry-level SE. Even if residual values are strong, the lease rates will always be substantially higher than for an equivalent BMW 330d, which, let’s face it, can’t really be criticised for being too slow.

The attraction is for those drivers who are keen on adopting hi-tech products and the advantage that running in urban environments won’t cause problems for clearing diesel particulate filters which have to be regenerated when a vehicle travels at sustained high speed.

Like all full-hybrid cars the ActiveHybrid 3 will cover modest distances (one to two miles) at low speed on electric power alone, and with steady use of the throttle can actually reach 46mph, and will even lock out the engine at speeds of 100mph when coasting.

It perhaps just begs the question as to what the full 340bhp, and 5.3-second 0-62mph time is for if the car is geared toward saving fuel.