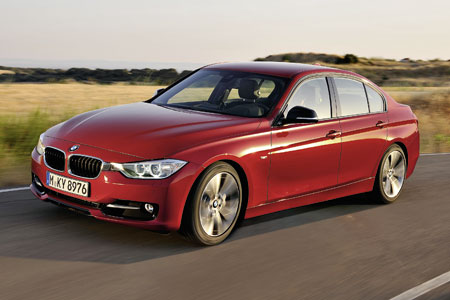 Choosing a premium-badge saloon is perhaps one of the most difficult decisions facing a user-chooser.

Such a high level of competence from cars like the Audi A4, Mercedes-Benz C-Class and now the new BMW 3 Series result in a vast list of important boxes ticked for drivers and fleet operators.
BMW is hoping its new 3 Series will be injected with a little more personality which can be tailored to appeal to the vitally important company car driver (70% of new 3 Series sales will be fleet purchases).

Three new equipment grades sit above ES and SE. Modern, Sport and Luxury line aim to give the 3 Series’ interior more personality. A 6.5-inch flat-screen style centre console design looks great and design touches in Sport and Luxury work really well, helping it to stand out against rivals like the Audi A4.

The Modern line is the only major misstep. The trim features a log cabin-style three-dimensional wood surface which could be acceptable only in markets like the US. But at least BMW is trying something different. An M Sport version will be available in summer 2012.

Eco Pro makes its way on to the 3 Series and brings BMW’s Efficient Dynamics package to the forefront by reducing fuel costs by up to 20%, which will help drivers get closer to the manufacturer quoted mpg figure.

It really does change the way you drive, but it doesn’t force driving style tips. It’s entirely the driver’s choice to engage the function.

Drivers can select Comfort, Sport and Sport + modes on the Drive Performance Control system to adjust the car’s settings to suit the situation.

The best-selling model will be the 163bhp 320d with Efficient Dynamics, with CO2 emissions of 109g/km and fuel consumption of 68.9mpg.

Despite losing 40kg in weight, the new 3 Series is actually 93mm longer than the previous model, translating into more interior space. Boot space has been improved by 20 litres to 480 litres.

Steering is precise and the 3 Series has plenty of grip when driven enthusiastically, but it’s also able transform into a comfortable motorway cruiser at the flick of a switch, with ride refinement improved over the previous generation.

When driven in Comfort or Eco Pro, bumps are absorbed without a fuss. Flick back into Sport or Sport + and the throttle opens up and the suspension tightens.

Agility and driving dynamics remain outstanding attributes on the new 3 Series and it proves it’s possible to combine sportiness, comfort and economy in one package.