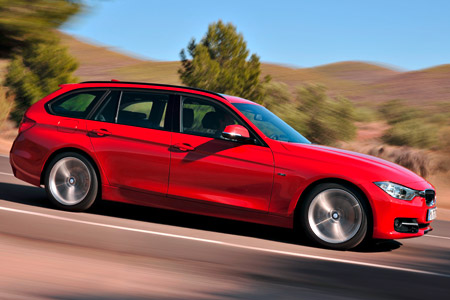 The latest version of the BMW 3 Series saloon has been on sale for a few months now, but for those drivers solely focused on more practical cars, it might have passed them by.

From September, the 3 Series will become available as a Touring estate version and it has much to offer compared with the outgoing model. It will also become the youngest estate car in the premium segment.

Available initially in 320d, 330d and 328i engine variants, the new 3 Series Touring is larger and roomier than the previous version, but is also stiffer and lighter.

The latter bodes well for driving behaviour, fuel consumption and CO2 emissions. The new model comes with CO2 emissions from 124g/km for the 184bhp 320d Touring – equating to 60.1mpg on the combined cycle.

A longer wheelbase in the new Touring results in extra knee room for rear seat passengers, while they also benefit from improved headroom.

The rear seats can be folded by pushing a button on both sides, with a 40:20:40 split, and each section can be lowered individually if necessary.

All Touring models come with an electrically-operated tailgate and a standard luggage net which can be fixed in one of two positions, depending on whether the rear seats are lowered or not.

The car can also be specified with a stowable divider to prevent items from moving around the luggage compartment, as well as a sensor facility to allow the tailgate to be opened from outside hands-free.

Anyone familiar with the previous 3 Series Touring will probably notice less feeling in the steering thanks to the fuel-saving fully electric set-up, but this also allows BMW to offer a range of safety and convenience features such as a lane-keeping assist system.

However, the rear-wheel drive balance and responsive chassis still makes it the driver’s choice in the sector, while M Sport versions come with lowered, stiffer sports suspension as well as the option of adaptive damping.

As an estate car, the 3 Series Touring might lack the overall load-lugging credentials of mainstream alternatives but its improved ability and impressive efficiency should make it a highly desirable option for both fleets and user-choosers.