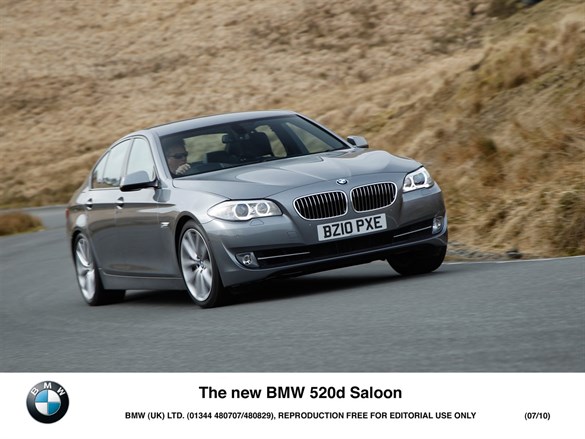 Three years ago BMW began adopting new technology across its range that thrust its models to the top of their classes for CO2 emissions and fuel consumption.

It was called EfficientDynamics and included a variety of measures, some or all of which were put in place across the range.

The BMW 5 Series didn’t receive the same level of EfficientDynamics as the 3 and 1 Series, but the new 520d brings it into line. It will take the bulk of 5 Series saloon sales (about 70%) and four-cylinder diesel is the backbone of the executive saloon sector in the corporate market.

For the first time, the 5 Series has stop-start technology as part of its EfficientDynamics package and the first variant to benefit is the 520d.

BMW has been able to move forward with its low-CO2 technology on the latest 5 Series, and while the automatic versions of the 525d and 530d hit 160g/km, the manual 520d delivers a no less impressive 129g/km.

Its power output of 184g/km is equivalent to the BMW 530d of 1998, but even though we thought the 530d of that era was mightily impressive at the time, that car’s CO2 emissions were 189g/km.

Back then, hardly anything on the road had CO2 emissions as low as 129g/km.

So it shows some of the astonishing progress made during the last decade as well as how savvy BMW has become in realising its buyers now take CO2 emissions very seriously.

Compared with the outgoing EfficientDynamics model it replaces, the new 520d has 7bhp more, but CO2 emissions are 7g/km lower.

The 520d SE also comes with 17-inch alloys as standard so despite its strong green credentials, it doesn’t look like an economy version.

The interior seems a bit plusher than in the previous 5 Series, too, with more expensive feeling materials used on the dashboard and doors.

Its 2.0-litre engine purrs quietly with no unpleasant noise intrusion and with a broad torque band – the maximum of 280lb-ft is available from 1,900-2,750rpm.

The 520d feels beautifully balanced on the road, although owners have the choice of tailoring the driving experience to a more focused set-up through the options list, with active steering (£1,300) and variable damper control (£965) while M Sport derivatives come with lower, stiffer suspension.

The 520d’s ultra-low CO2 emissions and exceptional frugality with fuel are just two attractive features of a very compelling package.

Although its rivals are also good, almost all objective measures point to the new 520d being a better product.