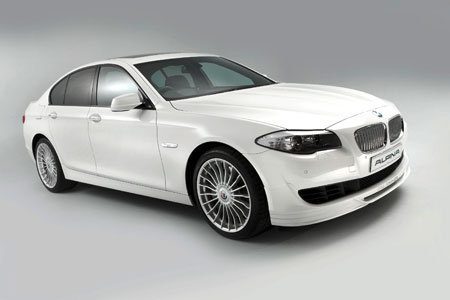 Performance has often taken a back seat when it comes to company cars, particularly as the regime of CO2 emissions has become increasingly punitive for thirsty cars.

For example, it’s now possible to choose a 313bhp diesel Audi A6 or BMW 5 Series as manufacturers have developed twin-turbo six-cylinder diesels.

But what if that isn’t enough? Currently 313bhp is about the limit from diesel executive saloons, and if you look to Jaguar and Mercedes-Benz, the most that can be mustered by the XF and CLS is 275bhp and 265bhp respectively.

Senior executives who insist on a high-performance company car needn’t go down the petrol route and burden themselves with high benefit-in-kind tax bills (and their employer with high National Insurance contributions).

Alpina has been producing high-performance BMWs for many years. The D5 has a diesel enginge and is based on the BMW 5 Series but has a number of technical changes to the chassis and engine making it more rewarding to drive as well as more potent,. However, the fuel consumption and CO2 penalty is only modest over the BMW 535d.

Inside, bespoke Alpina instruments and other detailing give the D5 a more exclusive feel than a 5 Series, while the extra performance is instantly noticeable in the surge of acceleration, almost instantaneous thanks to the eight-speed automatic gearbox.

Although there is only one UK distributor for Alpina in the UK – Sytner in Nottingham – Alpina provides technical information and replacement parts to the BMW network, meaning servicing and warranty work is fully integrated and carried out at any BMW dealer, so it shouldn’t work out much more expensive than a top-end 5 Series.

So for senior executives that really don’t want to give up their high-performance saloon, the Alpina D5 could be a less costly alternative that delivers the status and thrills.