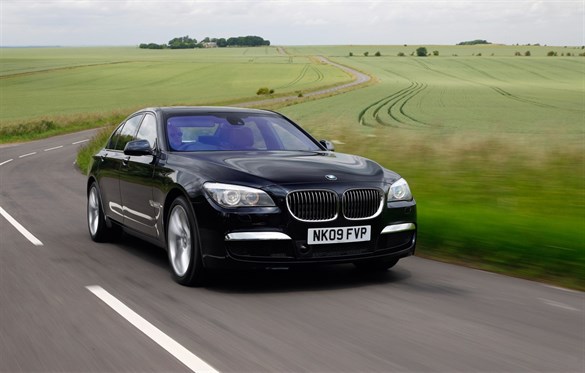 BMW’s 7 Series lost out to its smaller sibling, the 5 Series, in the Fleet News Awards best boardroom car category. The 5 Series, we surmised, offers everything a director could need in a car. Which begs the question, why would anyone want the 7 Series?

It’s not as simple as that, of course. The 7 Series is a status symbol for those at a senior level, but at the same time it doesn’t suggest the driver is being ostentatious with their company’s money.

It’s also bigger, offering more rear legroom for those who prefer to be chauffeured around, with a boot large enough to swallow a small county.

And, being BMW’s flagship car, the 7 Series features the company’s latest technology. In the case of this model, that includes head-up display showing GPS-mapped current speed and the speed limit (including temporary limits) and Google Earth sat-nav, although it only works down to one-mile scale before switching to the conventional 3D view.

It also includes the next-generation Night Vision, which now features Pedestrian Recognition. Scanning the road up to 300 metres ahead, Night Vision highlights the shape and proximity of any heat sources that are close to the predicted path of the car to warn the driver.

Surprisingly, the car was missing some of the technology tricks increasingly common further down the scale, such as one-touch indicators. And the interior mirrors the 5 Series’ basic functionality – it’s improved on previous models but still falls short in design and feel of its Audi and Mercedes-Benz rivals.

But the plus-points out-weigh the negatives.

The doors are not double-hinged, which means they can be swung open as wide as required without bouncing back or, worse still, bouncing forward to snick an adjacent car.

The seats are class leading, snugly holding you in place with excellent back support for longer journeys.

Four driving modes rise though comfort-normal-sports-sports+. At the
touch of a button the driver can alter gear change, throttle response, degree of power steering assistance, damper settings and the Dynamic Stability Control+ programme.

However, courtesy of EfficientDynamics technologies, the 740d still achieves 40.9mpg on the combined cycle with CO2 emissions of 181g/km. On test, we averaged a little way short of this, at 32mpg.