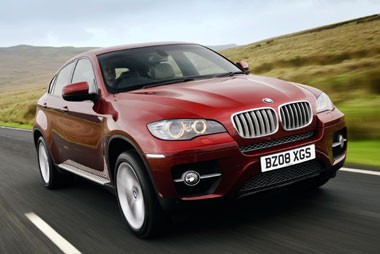 You would imagine that now is not the most sensible time to be launching a £40,000-plus SUV, what with fuel prices rocketing, house prices plummeting and the whole country seemingly gripped by financial depression.

Then again, not every company is BMW, and not every car manufacturer seems to think there is a gap in the market for an SUV that looks like a coupé.

And to be fair, we could probably live without it as the firm already produces the excellent X5.

But BMW has already sold its allocation of X6s this year – 1,600 have been snapped up.

You can choose from the familiar 3.0-litre diesel (badged xDrive 30d) or, the subject of this test, the twin-turbo version (xDrive 35d).

The new naming strategy will filter across to the X5 and the new X3 in time. There are also two petrols – a 3.0-litre twin-turbo or, for the utterly profligate, a twin-turbo 4.4-litre V8.

Common sense, if such a thing exists at this level, dictates that 85% of sales will be diesels.

The X6 uses the X5 as its basis, but virtually every panel is new, helping to create a more coupé-like shape thanks to the dramatically tapered rear hatchback and roofline.

Critics have already suggested that this impinges on boot capacity and rear space.

And they’re right, it does, but this matters not a jot.

Anyone who wants extra room can buy an X5, while those who want something really different can have an X6. and enjoy its even more honed driving experience thanks to the fitment of Dynamic Performance Control – a clever differential that makes the X6 very light on its toes for such a car.

Staggering is the only way to describe the driving experience of the X6.

A car this big, this heavy and this lofty has no right to perform in the way it does.

Performance from the twin-turbo diesel is faultless, providing huge swells of torque from the bottom of the rev range and transmitting it seamlessly through a seven-speed automatic gearbox.

The steering is weighty and direct, with the nose of the X6 going exactly where you point it, while the ride quality is very good for a car wearing such large wheels.

The whole package feels exceptionally planted, with high-speed manoeuvres and lane changes done with a minimum of fuss and non-existent body roll.

The agility of the X6 is astonishing and you soon forget the type of car you’re driving as you devour twisty roads with ease.

As a result, the firm will have no trouble at all selling every model it builds.