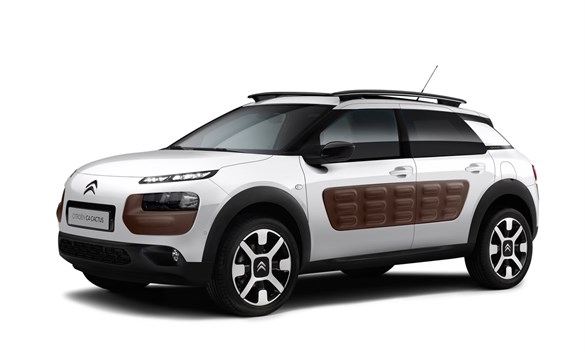 Citroën has produced some iconic cars in what seemed to define the appeal of the best French cars. Functional yet stylish; quirky yet mainstream. But cars such as the 2CV, DS, BX and XM are now distant memories.

The Citroën range today is showing signs of popularity. The DS3 is a strong seller and offers low wholelife costs. The latest C4 Picasso (and Grand C4 Picasso) show that the company hasn’t lost its knack for those values mentioned above.

The company is also undergoing a restructuring that witnesses the decoupling of the relatively new DS upmarket sub-brand as a division in its own right.
Citroën says that as the new DS models have established what a more exclusive French car should be, the company decided it was time to redefine what the mainstream C-line cars are about.

The C4 Picasso was an interim model – a bridge between what had gone before and the new order.

The C4 Cactus is the first of the new C-line products, which are meant to embody simple and practical mainstream cars.

Whereas most medium cars have undergone significant changes in their component sets in the past couple of years, the C4 Cactus uses a well-trusted older-generation small car platform, less advanced (and less expensive) than the new C4 Picasso.

With the help of some strict weight-saving decisions (it has an aluminium bonnet, the rear windows pop out as vents rather than go up and down, while the rear bench is one piece rather than split), Citroën claims to have saved 200kg compared with the C4 hatchback, despite sharing a similar ‘footprint’ on the road.

In fact, in its most basic form the C4 Cactus weighs 965kg – 10kg lighter than a DS3. This has worked wonders for fuel efficiency, with the best-performing petrol model (the 1.2-litre PureTech 82) delivering 65.7mpg on the combined cycle, with CO2 emissions of 98g/km.

Perhaps the most distinctive feature of the Cactus is the patented Airbump cushioned panels around the car.

Developed to resist low-speed and car park damage, the panels can be specified in one of four colours, contrasting with or complementing the car’s paint colour.
They require no specific maintenance and are designed to resist impacts from trolleys or other doors at speeds up to 3mph.

The interior of the C4 Cactus lacks clutter. There are six buttons below the touch-screen display in the centre of the dashboard, and vital information is displayed on another smaller screen directly in front of the driver.

Citroën has mounted the passenger airbag in the roof to creat a lower, flatter dashboard, with a large glove compartment opening on top.

Automatic versions of the car are available, with a virtual bench seat appearance in front, although seating is only intended for two. The parking brake has a modified handle mounted further forward and there are D, R and N buttons on the dashboard for drive.

There are choices of materials depending on equipment grade and an optional panoramic roof is fitted with a strong UV filter, which means occupants will enjoy the benefits of the (shaded) glass roof, keeping out heat and dispensing with the weight of a sun blind.

Connectivity features include Citroën e-Touch, which includes emergency calls (to emergency services or for breakdown assistance), an eco driving record and a virtual service book. Citroën Multi-city Connect, available in some countries, comprises a special USB drive plugged into the central glovebox, enabling connection to the 3G network along with real-time access to information and allowing the use of up to 18 apps.

We spent most time in the 1.2-litre petrol model, which was relatively refined for a three-cylinder engine, and offered more than enough torque to keep pace with traffic in the lightweight Cactus.

Unlike many C-sector cars, whose manufacturers often boast about how the chassis has been honed at the Nürburgring, with over-sized wheels and firm suspension, the C4 Cactus feels designed for comfort. Bumps in the road are soaked up with much greater finesse than in most cars of this size.

There is no major worry about excess body roll when cornering. The Cactus just isn’t that sort of car. While nimble and agile in urban environments, it has a relaxed demeanour on the open road, allowing occupants to enjoy the ride at a slower pace.

The C4 Cactus offers something different for people choosing a medium-sized hatchback. It has plenty of kerbside appeal, as well as novelty value in its quirky design in a sector dominated by plain-looking hatches.

Overall, it’s a likeable, characterful car that should also prove cheap to run.