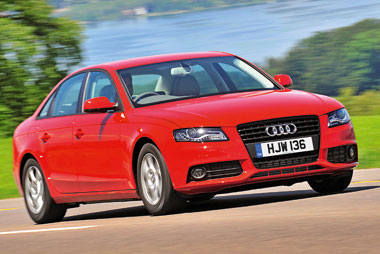 The Audi A4 is the default choice for those employees not drawn to BMW’s 3 Series and, with the introduction of its low-CO2 ‘e’ version, the carmaker hopes it has found the perfect rival to BMW’s Efficient Dynamics technology.

On running costs at least, there is very little to split an A4 TDIe from SE the BMW 318d SE – CAP Monitor suggests a fraction of a penny per mile advantage to the BMW at four years/ 80,000 miles.

And this is the same when it comes to company car tax. Despite the Audi emitting 120g/km of CO2 and the BMW only 119g, both currently sit in the lowest diesel 13% benefit-in-kind tax band, which means a 40% taxpayer will pay £1,309 annually for driving a company-supplied A4.

Interestingly, the other rival in this category – Mercedes-Benz’s C220 CDI BlueEfficiency – produces just 7g/km of CO2 more than the Audi and yet drivers of this car are hit with an 18% BIK tax bill, although a 117g/km version with start-stop is merely weeks away.

This efficient Audi has the 136bhp common rail diesel first seen in the A6 TDIe, returning a quoted 61.4mpg.

Tested over a 150-mile country trip on various roads, the A4 saloon achieved exactly the quoted figure, although we did hope for a little better as these were optimal economy driving conditions – lengthy 60mph runs and few stops and starts.

However, 60-plus miles per gallon for a car of this size and weight is still very impressive.

In urban areas, economy remained on the high side at 45mpg-plus thanks to the stop/start and energy recuperation systems.

The start-stop system cuts engine power at idle, then restarts when the clutch is depressed. This is estimated to cut CO2 emissions by 5g/km.

The overall driving performance and feel is one worthy of a premium German car, while the driver of a city car would be happy with the economy figures.