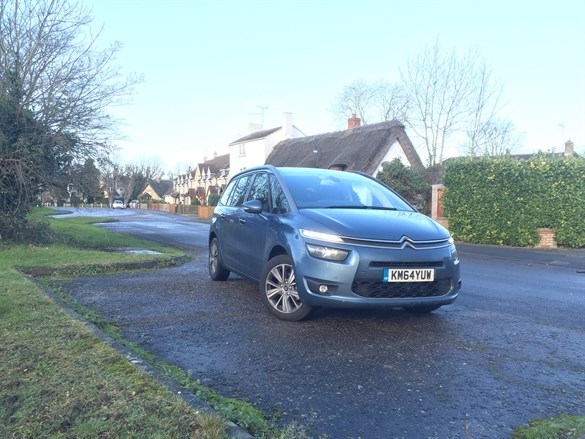 This month, some grumbles. Make no mistake, I am very impressed with the Grand C4 Picasso. But a number of issues have arisen, and I’ve decided to air them all in the same review.

First, an odd quirk: the near-side folding wing mirror often doesn’t return to its preset position, but rather one that points a few degrees lower, requiring minor readjustments at the start of almost every journey. More irksome was the engine cutting out in sub-zero temperatures while it was still cold. It happened on four out of five occasions as I dipped the clutch to pull up to a junction less than a mile from my house and required a re-start. No major issues, but I’d be interested to hear if any readers have experienced anything similar.

Finally, and this one will require a trip to our local Citroën dealer, the nearside rear-parking sensor frequently jams when reversing into a space. There are no obstacles to trigger the alert – the continuous ‘stop, you’re about to hit something’ bleep – and it simply requires a return to non-assisted parking.

More amusing than annoying is the total over-reaction of the Grand C4 Picasso when running low on screenwash. If you continue to use the last few drops in the reservoir before topping up, not only do you get a fill-up alert, but the service light pings on, and remains on for the remainder of the journey. Astonishingly, when I did top up, the car swallowed a five-litre can of washer fluid – and still wasn’t full.

To offset some of the criticisms in this review, here are three plus points, some of which will be explored in future reviews. The fuel filler has a misfuelling prevention device to ensure it can be filled with only diesel, preventing costly mistakes. The rear seats have a one-action fold flat lever which is among the easiest I’ve ever used. The stop-start system is almost
instantaneous and seems to work in all weather conditions. It kicks in at speeds of up to 14mph, saving even more precious drops of diesel.