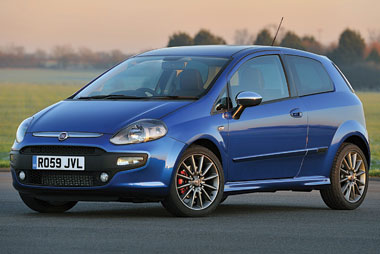 Fiat is putting the spotlight firmly on economy and the environment with its new Fiat Punto Evo (the new name for the Grande Punto).

There is a range of five engines, which all conform to Euro 5 emissions standards and are all fitted with stop-start technology as standard.

Prices start from £12,995 OTR for the three-door MultiJet Active model.

Safety conscious fleets will also be impressed by knee airbags, double seatbelt pre-tensioners and ESP with hill holder all offered as standard.

In addition, every model in the range will be fitted with the Blue&Me system giving drivers intuitive control of all the car’s major functions.

All models, except Active, can be specified with the Blue&Me TomTom system with a touch-screen navigation system, mobile phone, trip computer and MP3 player with steering wheel commands.

The most notable change with the new car is its interior design.

Hard angles have been abandoned and replaced with softer lines that give an impressive interior space.

However, despite adding many features which are likely to appeal to the fleet market, Fiat has not officially set itself any sales targets in this sector, according to bosses.

The unveiling of two new ‘Eco-technology’ engine line-ups, the MultiAir petrol family and MultiJet II diesels, combine to make this an exciting choice for fleets.

The MultiJet puts the Evo into the lowest 13% diesel BiK tax band, while offering a generous amount of standard equipment.

Factor in its impressive economy and 100% first-year write-down allowance, and the Punto Evo could become a popular fleet choice.