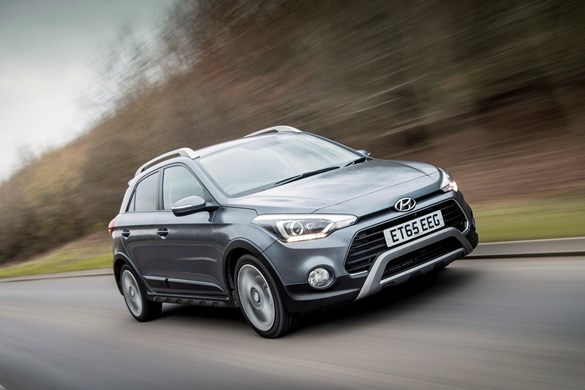 The SUV and crossover market is booming across Europe, with manufacturers racing to get new vehicles to market. Hyundai is one of many looking to capitalise on this growth and it launched its Tucson mid-size SUV in September last year.

This replaced the ix35, and joined the Sante Fe, the company's large SUV, in its model line-up.

Until now, however, Hyundai did not have a competitor in the small SUV/crossover sector to rival models such as the Renault Captur and Suzuki Vitara. To fill this gap, Hyundai has launched the i20 Active. Based on the SE version of the regular five-door hatch, the i20 Active offers a ride height raised by 20mm and a number of styling changes to give it a more rugged, chunkier look.

Hyundai says more than 50% of the exterior parts are unique to the new model, which has only one equipment grade and just one engine: the manufacturer’s new 1.0-litre T-GDI. In the i20 Active, this three-cylinder turbocharged petrol engine develops 100hp and offers an official fuel economy of 58.9mpg and CO2 emissions of 110g/km.

The new engine is also available in the regular i20, where it replaces a similarly-powered 1.4-litre unit, but with improved CO2 emissions and fuel economy.

Compared to the regular five-door i20, exterior changes to the i20 Active include new bumpers featuring integrated fog lights, skid plates and silver roof rails. Black plastic cladding on the lower body and wheel arches add to the rugged look, while 17-inch wheels complement its appearance.

Despite its styling, the i20 Active does not offer four-wheel drive or clever electronics to boost off-road ability, and shares its running gear with the regular supermini.

What the raised ride height does do, however, is make it easier to get in and out of the cabin as well as provide a more commanding driving position. Improved visibility adds to the car’s pleasant driving experience. Its light steering and gearshift make it easy to drive and manoeuvre, while its suspension, which Hyundai says has been tuned specifically for European roads and is stiffer than that of the regular hatchback, keeps body roll in check.

The engine impresses, too. It revs freely and is refined, producing the distinctive thrum associated with three-cylinder engines, while providing ample performance.

The i20 Active shares its interior with the regular i20, which means it is spacious, logically designed and well built, while the materials understandably feel more hard-wearing, rather than luxurious.

Overall, it’s a competent package and will appeal to potential supermini customers who want to join the growing number of crossover drivers.