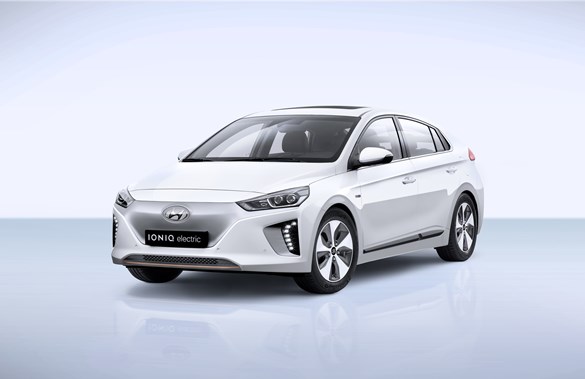 It’s unlikely that anyone procuring cars now doubts the ability of Hyundai (and Kia) to compete with some of the biggest manufacturers on the world stage.

Last year the company introduced the first mass-production hydrogen fuel cell car to the UK, the ix35 FCV, and soon it will be leapfrogging a number of big players by offering an affordable hybrid, electric car and plug-in hybrid. The latter will arrive in 2017, but the EV and Hybrid will be available in the autumn, with orders now being taken.

The unique proposition for these three alternative fuel powertrains is that they are each contained within a common body architecture.

The Hyundai Ioniq is a lower-medium hatchback, not dissimilar in design to the now discontinued Vauxhall Ampera. However, the Ioniq offers seating for five adults and a pretty generous luggage compartment.

The Ioniq Electric Premium, the entry-level grade for the EV, starts at £28,995 (before the plug-in car grant is applied). Its features reflect the Hybrid Premium, but add rain-sensing wipers, 16-inch alloy wheels and intelligent cruise control. All Ioniq models come with Hyundai’s five-year/unlimited mileage warranty, with a separate eight-year/125,000-mile warranty on the high-voltage battery.

Perhaps we shouldn’t really be comparing the electric version of the Ioniq with the Hybrid, but the interior has a slightly more sophisticated feel, almost entirely created by the absence of a gearstick (park, drive and neutral are selected via buttons) and foot-operated parking brake.

The Electric is distinguished externally with a covered grille (it doesn’t have an internal combustion engine to cool), copper styling elements rather than blue, and a slightly different design within the rear light cluster.

The pleasure of running a car in silence at high speed is here, and the maximum range of 174 miles is not to be sniffed at. It should guarantee more than 100 miles of high-speed running, and as Ecotricity recently announced a £5 fee for a top-up charge at a public charging point, those extra miles over other similar priced EVs could prove valuable.