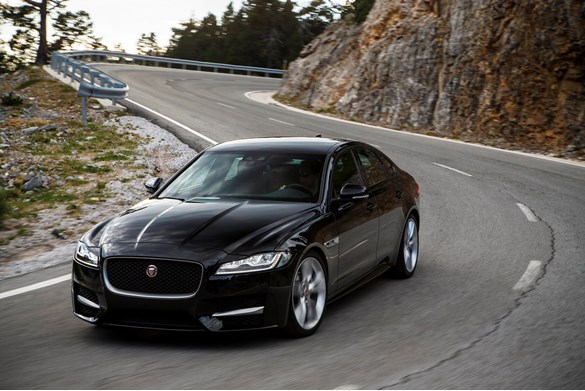 Jaguar is undergoing an unprecedented period of new model launches. It re-entered the premium upper-medium sector this summer with the XE, and in rapid succession the larger XF saloon is being replaced with a new model, weeks before the F-Pace crossover is unveiled to the public at the Frankfurt motor show.

The XF launched in 2008 redefined the Jaguar brand, giving it a more modern feel and broader appeal.

While that car was a big step forward from previous Jaguars that had clung too hard to the traditional image and styling of the past, it still had a legacy of the earlier era: the platform was a development of what had originally underpinned the S-Type of 1998.

The new XF makes a clean break from the past. It shares some of its ‘aluminium-intensive’ architecture with the XE. The use of aluminium means a significant weight saving over its predecessor – up to 190kg, although that doesn’t take account of the fact that the lightest models in the new XF range come with manual transmissions, which weren’t available on the outgoing model.

However, it still gives the car a weight advantage over its rivals, and less weight also means better efficiency.

Jaguar has always been successful in producing cars that appeal to the heart. Character and passion has always been evident and an antithesis to the clinical feel of some if the cars’ German rivals.

But the numbers haven’t always stacked up, or key derivatives have been missing at launch.

Even the original XF launched with six- or eight-cylinder engine options at a time when the sector was becoming dominated with four-cylinder diesels.

Not this time. Yes, the six cylinder engines are there – stronger, smoother and more efficient than before – but the bulk of the range is made up of the new 2.0-litre four-cylinder ‘Ingenium’ diesel.

The XF has class-leading fuel efficiency with CO2 emissions from 104g/km for a 163hp manual 2.0-litre diesel. Despite this attractive CO2 position, we still suspect more customers will prefer the automatic, which we tried in R-Sport guise.

We know this combination well from driving the XE, so there were few surprises when the XF felt both responsive and refined with four-cylinder power. It will be overwhelmingly the most popular combination in the UK, and has CO2 emissions of 114g/km. 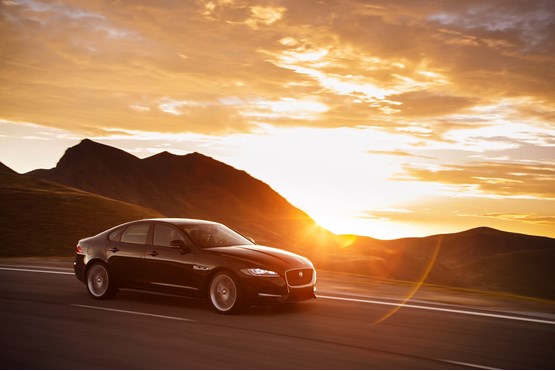 Jaguar claims the XF also appeals to the head. With fuel economy of up to 70.6mpg on the combined cycle from four-cylinder engines and even more than 50mpg from the new 300hp six-cylinder diesel, the XF has a strong rational appeal.

Residual values of its predecessor were good throughout its lifecycle, and the new model gains an uplift, making it stand out against its ageing rivals from Audi, BMW and Mercedes-Benz.
And, like the XE, Jaguar is also offering fixed price service packages from £525 up to five years/50,000 miles or from £675 for up to 75,000 miles. 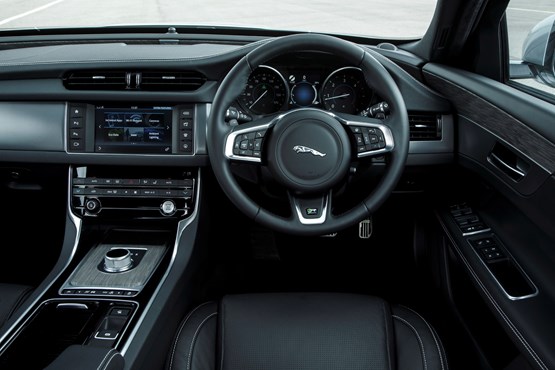 All come with DAB, and automatic versions have Jaguar’s new ‘all-surface progress control’ which is like a low speed cruise control that allows rear-wheel drive models to gain better traction when setting off on slippery surfaces. The driver sets the system’s speed and the car ensures the smoothest acceleration until it’s safely underway.

The XF’s styling is an evolution of the previous XF, but has a more purposeful stance, with a shorter front overhang and longer wheelbase. It means the car is roomier now, while the interior has a bit less showboating than the original – still special, but less contrived.

The 180hp 2.0-litre diesel combined with the eight-speed automatic feels lively enough. It has 317lb-ft of torque from low down and deploys it smoothly, yet keenly.
The XF now has an electric power steering system, resulting in a fuel consumption saving of 2% on diesel versions. But it offers impressive feel with supreme precision, hooking the car up intuitively on the twisty roads of our test route.

Our R-Sport rode on optional 20-inch wheels, but it still had a suppleness to its ride increasingly absent from cars in this class, especially on such large wheels. We imagine the standard 18-inch wheels would give the car a unique compromise between sharp handling and smooth ride.

We also spent some time in the 300hp V6 diesel, only available as a high-end S variant in the UK. It has a silky power delivery that also had a deceptively brutal turn of speed.

The new XF really is a 21st century Jaguar, with few compromises and hugely desirable attributes on emotional and rational levels.