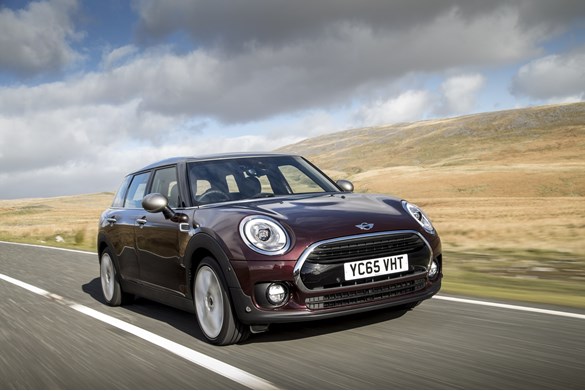 The latest generation of Minis seem to be tasked with redefining the brand for the first time since BMW launched the Mini hatch in 2001.

In 2014 the Mini hatch entered its third generation, and was followed by the first five-door variant with a longer wheelbase, increasing the car’s appeal, especially with corporate customers.

The Clubman estate is now entering its second generation and, while it has the look and feel of the Mini Hatch, it’s actually a rather larger car, with underpinnings shared with the BMW 2 Series Active Tourer.

It has a longer wheelbase than the five-door hatch (which itself is longer than the three-door), and is nine centimetres wider. That extra width and length benefit rear-seat passengers most.

The Clubman’s cabin is comfortable for four adults and will accommodate five if necessary.

These more generous dimensions are part of Mini’s strategy to shift the Clubman into the sector above the hatch, to compete with cars such as the Volkswagen Golf, Mercedes-Benz A-Class and Audi A3 (no mention of the BMW 1 Series, although this two-pronged attack on rivals from BMW shouldn’t do it much harm).

There is no Salt or Pepper equipment pack on the Clubman either, with Mini saying most of the items included in these are standard. Navigation is also standard, while the popular Chili equipment pack is expected to be a sought- after option. Some more sober colour options have also been introduced to increase its appeal with fleets.

Like the latest Mini hatch, the large speedometer in the dashboard centre, as found in the original Mini and the first two generations of the BMW version, has now been moved in front of the driver.

The ghost of speedometers past houses the navigation screen and has an LED around its circumference which illuminates in line with vehicle speed and which also lights up in other colours depending on what functions are being selected.

On the road, the Clubman feels like it has the Mini DNA, with sharp, almost intuitive steering responses, a firm but not harsh ride (even on our optional 18-inch wheels) and seemingly limitless grip when cornering.

The 2.0-litre diesel is quiet and smooth, and with the short-throw six-speed gearbox can always be kept on the boil.

The new Clubman is an intriguing choice as a full-size lower-medium option that’s about as practical as most of the other hatchbacks of this size but which retains all the driving fun of a Mini.