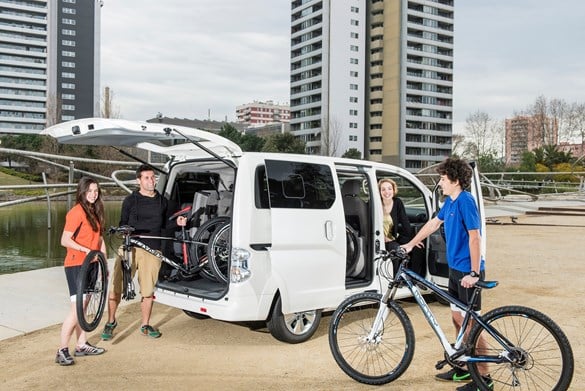 It’s actually a five-seat e-NV200 Combi with a pair of extra seats in the luggage area, though the seats can’t be retro-fitted. They’re hinged at each side of the van, and can be flipped up and tethered to the roof if you need the extra boot space instead of more seats, fitting three full-sized mountain bikes into the 2.94 cubic metre gap.

With seven seats in place there is still 870 litres of luggage room, which means even at full passenger capacity you’ll have a decent amount of loadspace.

It’s possible to buy the Evalia outright, costing £23,400, and a Plus version is on offer for a further £666 if you have regular access to 66Kw AC charging. For that money you get a built-in touchscreen sat-nav, air-con, rear-view camera, automatic lights and wipers, Bluetooth connectivity, cruise control, and a speed limiter.

Crucially for fleet managers, since it’s an electric vehicle (EV) it means zero tailpipe CO2 emissions and ultra-cheap ‘fill-ups’ at charging points too.

While the Evalia’s primary use is likely to be shuttling folk from airport or dockyard to hotel, there are applications for many other uses too, including postal, utility firms and, of course, taxis. This is the ideal solution in a lot of ways, because EVs are almost silent and extremely smooth to drive.

The private hire taxi business has been a little slow on the uptake of EVs so far, but Blackpool-based firm Premier Cars is set to change all that. Currently running a fleet of 21 Leafs – and about to order some e-NV200s to carry more customers – managing director John Cutler explains: “You can save a lot of money using EVs. Our fares are already lower than council-advised rates, but our drivers are also around £100 per week better off from the lower fuel costs.”

This works because he has a small network of fast-charging stations. Official figures state this method should give an 80% charge in 30 minutes – with a full charge providing just over 100 miles – but experts believe that topping up a battery that is 10-15% full until it reaches 60-75% is the optimum way to maximise charging versus time in the car.

You might think that so much time spent plugged-in every day isn’t very productive, but Cutler claims quite the opposite. “The drivers spend that time making sure the car is presentable for the next client,” he says.