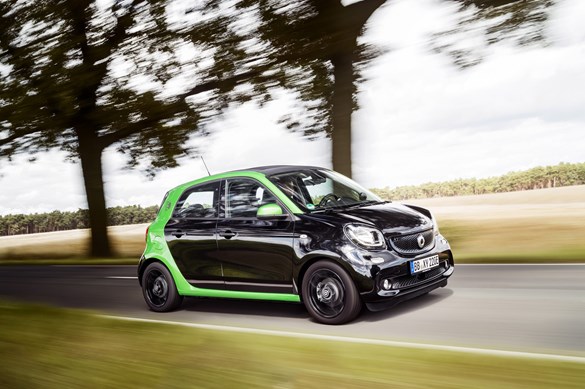 Smart is offering a four-seat electric car for the first time with the new Forfour Electric Drive.

It will go on sale alongside the Fortwo Electric Drive later this year, and it’s the five-door, four-seater Forfour that Smart believes will be the best-seller in the UK.

Although prices hadn’t been set at the time of testing the car, the Forfour should reflect other models in the range and command a £500 premium over the Fortwo, with many customers then recognising the extra value in the additional doors and seats of the Forfour.

The Smart Forfour is a joint development with Renault that also spawned the current Twingo. The Forfour Electric Drive is produced in Slovenia, with the drivetrain manufactured by Renault in France. There is no word on whether an electric version of the Twingo will be launched, but Renault already has a compact EV in the Zoe, so maybe it is unnecessary.

Potential battery range in the Forfour is slightly lower than in the Fortwo (96 miles instead of 100), with maximum power of 81PS from the electric motor and top speed electronically limited to 81mph to avoid wasting charge unnecessarily.

The car will be sold with a standard 7kW charger, meaning the car can be charged in around two and a half hours from empty using a 16amp socket. Early in 2018, Smart will launch a 22kW on-board charger, which means the Smart could be charge in around 45 minutes using a 32amp charger.

Smart had considered delaying the launch of the Electric Drive models until this rapid charging system was available, but has decided to introduce it with the 7kW on-board charger.

The Forfour Electric Drive is nippy around town and eager to take advantage of gaps in traffic with responsive acceleration. Despite being slightly less powerful than a Renault Zoe, it actually accelerates more quickly. The Forfour takes 12.7 seconds to reach 62mph from rest, while a Zoe covers the same benchmark in 13.5 seconds. It isn’t as quick as the Volkswagen e-Up, (12.4 seconds) and is also slightly behind on the e-Up's 99-mile electric range.

Like other Smart models, there are three equipment grades: Passion, Prime and Proxy, with power steering and heated front seats standard from Prime, as well as a lane-keeping assistant.

The maximum range of 96 miles is disappointing compared to the latest models coming to market (the new Zoe is up to 200 miles). In winter it wouldn’t be surprising if this fell to 60 or so miles, with heated seats and climate control as well as headlamps and windscreen wipers adding to demands on the battery.

We can’t help feeling the company should have been a bit more ambitious and given more people a reason to switch to electric.