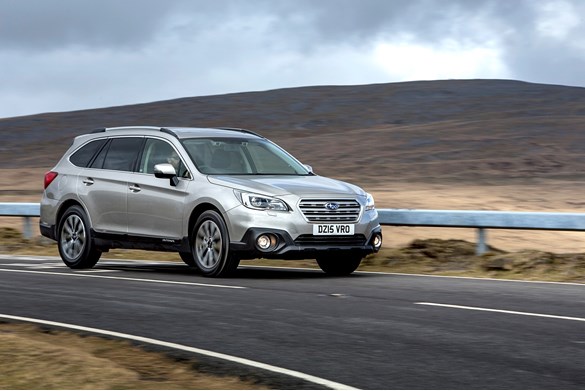 Subaru has had a low profile in the UK since the market for affordable high-performance saloons went off the boil.

The disappearance of these cars from company car choice lists during the past 10 years left Subaru with its all-wheel drive specialist niche, serving those who really need traction from all four wheels.

But as the market for crossovers and SUVs has been booming, the types of cars that Subaru has in its UK line-up have appeared more attractive to fleets.

The compact crossover XV, based on the Impreza, and the Forester appear to tick boxes on the styling front, and their relatively low volume helps protect residual values. Subaru’s unique Boxer diesel engine also performs well on paper.

The Outback is Subaru’s largest car, and it has undergone a transformation for 2015.

Based on the model formerly known as Legacy (and soon to be changed to the baffling Levorg in a major revamp), the Outback offers all-wheel drive traction as well as increased ground clearance.

The 2015 model is more spacious than before, has a generous luggage compartment, and can carry more than the equivalent Vauxhall Insignia Country Tourer.
The automatic version of the Outback (which follows the launch of manual versions earlier this year) has a number of safety features based around autonomous emergency braking that aren’t available on the manual.

Like many other cars with the feature, it will warn the driver to brake should it decide the closing speed with the vehicle (or cyclist or pedestrian) in front is quick enough to risk crashing, and intervene if it decides the driver isn’t responding in time.

In most cases at low speed, this will avoid a crash, and at higher speeds where a crash is more likely, it should at least reduce the severity of the impact.

An additional feature with the auto is that, if the car has been parked facing a wall and the driver has incorrectly selected drive instead of reverse, it will not allow the car to move, cancelling all throttle input no matter how hard the driver is pushing the accelerator.

Driving the Outback is comfortable, and the 150hp diesel engine is hushed and keen, with little noticeable dulling  of its responses being paired to the CVT gearbox.  Maximum torque is available across a broader rev range than before too.

The Boxer diesel sits quite low in the engine bay, which helps keep the car’s centre of gravity low too, despite the increased ride-height, while the steering is also sharper for this latest Outback.

The interior is well-finished and can hold its own among the best of the mainstream upper-medium estate cars for quality.

The Outback Lineartronic serves a very specific niche in the fleet sector, but it serves it extremely well.