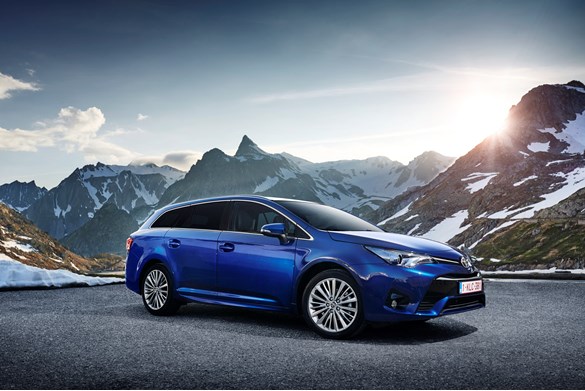 The Toyota Avensis can trace its lineage back to the first car Toyota built in the UK.

The company’s plant at Burnaston,  Derbyshire, began producing the Carina E in 1992 and, 22 years on, Toyota’s upper-medium sector car for Europe is still produced there. After the Carina E, the Avensis became a model designed, engineered and built with European customers in mind.

The sector has been shrinking for many years and there have been a number of casualties over the years as drivers have sought downsized (C-sector) or more versatile alternatives in the crossover sector.

At the same time, premium badge alternatives such as the BMW 3 Series, Audi A4 and Mercedes-Benz C-Class have witnessed strong growth in sales. Toyota has seen its share of the sector in Europe fall on the watch of the current Avensis, from 5.7% in 2012, to 4.3% in 2013 to  3.7% last year.

It hopes the heavily revised model will take it back to a 5.1% peak in 2016. As drivers have migrated to other sectors, what’s left of the D-sector in Europe is dominated by fleet sales. And perhaps one area where the previous Avensis had been left behind was in CO2 emissions.

Toyota – the world’s biggest vehicle manufacturer – has decided that as diesel cars are only popular in Europe, it’s more efficient from a corporate perspective to buy in diesel engines than develop its own. And it has sourced the engines from one of the best – BMW.

Although the engine is a bit less powerful than the one it replaces, Toyota says it has compensated by improving the throttle response.

But is this enough when you can get a 140hp Vauxhall Insignia with CO2 emission of 98g/km, or a 150hp Volkswagen Passat with CO2 of 107g/km?

Well, the changes to the Avensis don’t stop there.

There are two business-focused equipment grades within the four-trim line-up, both of which come with an array of standard safety technology under the Toyota Safety Sense banner.

The new Avensis is as spacious as its predecessor and our Touring Sports test car also had ample boot space.

The Avensis comes with a sleeker new look, with mostly new body panels and a revised interior design, partly because of the need to appeal to more emotionally driven user-choosers as well as the rational fleet managers.

For the former, the Avensis is a more engaging drive, with more responsive steering and improved ride. The car is best enjoyed in 2.0-litre D-4D guise, as it is this version that offers strong performance as well as excellent refinement. It is unbelievably hushed in the cabin on the motorway.

While the 1.6-litre D-4D is more fuel efficient on paper, and has lower CO2 emissions, it has a narrower torque band with a maximum of 199lb-ft produced between 1,750 and 2,250rpm, with what feels like a cliff-edge either side.

We think this engine might well have to be worked harder in anything other than motorway driving, offsetting its nominal fuel economy advantage.

For fleet managers, there are further considerations. As well as an expected uplift in residual values for the new model, service intervals on the diesel are increased to 12,500 miles with a reduction in servicing costs  over a typical fleet lifecycle compared with its Toyota-engined predecessor.