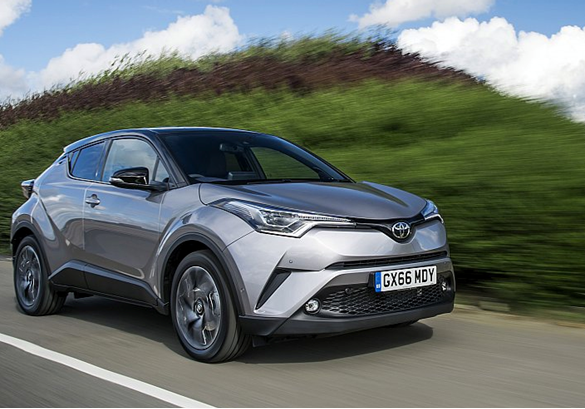 The medium SUV segment is one of the fastest growing sectors in Europe. However, it is also becoming increasingly crowded.

Recent entrants include the Seat Ateca and Renault Kadjar, while the segment also features such leviathans as the Nissan Qashqai and Ford Kuga, posing the question: how can a manufacturer ensure its car stands out from its rivals?

Toyota’s answer to this conundrum is its C-HR. Standing for Coupe High Rider, the new model differentiates itself through its concept car looks as well as by having no diesel option available.

These figures should make the hybrid attractive to fleets, which is expected to take 44% of the C-HR’s 16,000 annual UK registrations. Indeed, Toyota expects the hybrid to be the powertrain of choice across all customers: it anticipates it will account for around 70% of sales.

The hybrid uses the same engine and CVT transmission as the Prius, which means the shift between electric and petrol power is seamless, making urban driving a quiet and relaxing experience.

Its ride and handling live up to the C-HR’s sporty pretensions as well. Toyota has said it engineered the car to drive ‘on par with a good C-segment hatchback’ rather than an SUV, and that is an accurate way to describe it.

The low centre of gravity from its chassis negates the effect of the C-HR’s extra height, meaning body roll is controlled, while the car remains composed over rough road surfaces.

The C-HR is not as practical or roomy as the similarly-sized Qashqai, but there is more space for occupants than its concept car looks may suggest.

Visibility from the driver’s seat is generally good. However, the wide C-pillar, which houses the rear door handles, means the rear side windows are relatively small and this can make passengers feel hemmed in. The pillars also restrict rear visibility.

Otherwise the design and build of the cabin impresses. Toyota expects the C-HR to win conquest sales from premium brands and the interior reflects this quality.

There are three trim levels: Icon, Excel and Dynamic. All offer decent specification, while the 18-inch wheels which are standard on Excel and Dynamic raise CO2 emissions to 87g/km and lowers combined fuel economy to 72.4mpg.

All C-HR models feature Toyota Safety Sense, a package of active safety systems that can alert the driver to collision risks and intervene if necessary to avoid or mitigate the consequences of a collision. These include a pre-collision system with autonomous emergency braking and pedestrian recognition, lane departure warning, traffic sign recognition and automatic high beam headlights.