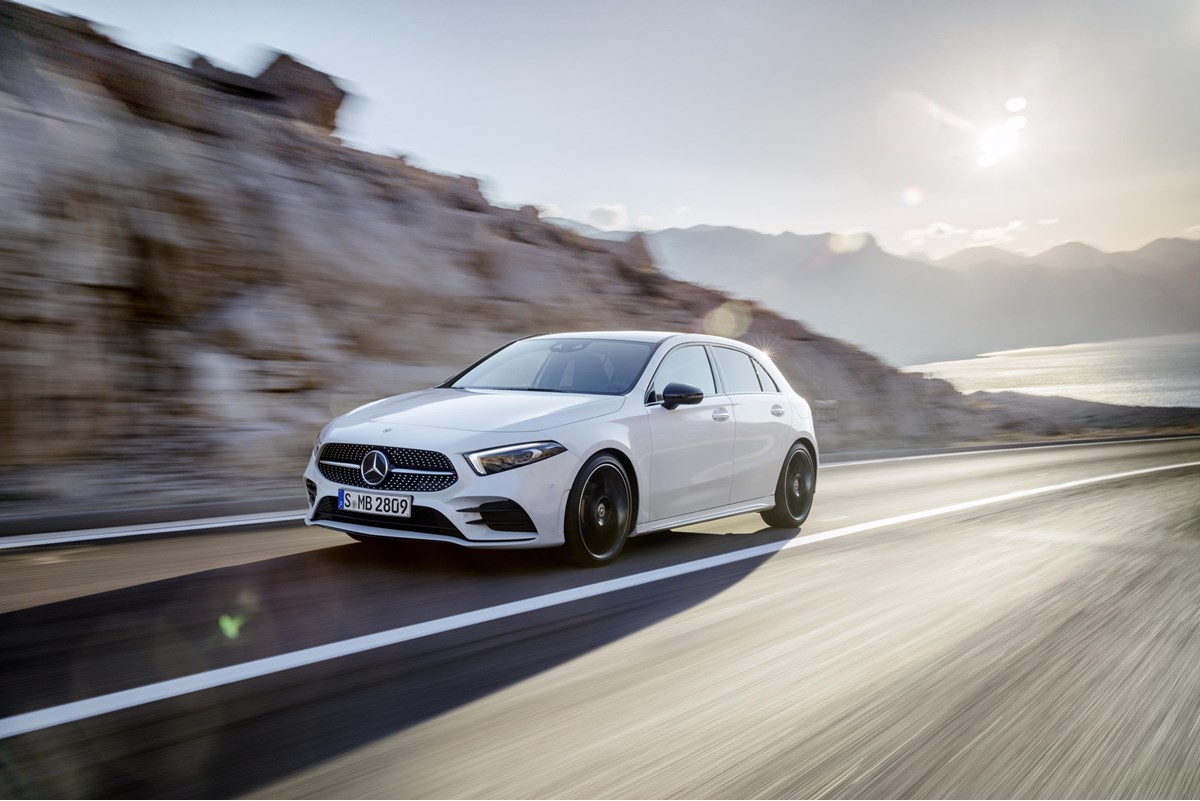 Around 43,000 A-Class models were registered in the UK in 2017 – more than a few premium brands (including Jaguar) registered in total. Is the fourth-generation A-Class, on sale in March with first UK customer deliveries in June, set to strengthen the grip of Mercedes-Benz on the number one premium car spot?

The new A-Class is a little larger than its predecessor, with a 30mm longer wheelbase, while the car is also wider. Aerodynamics are also improved, contributing to lower real-world fuel consumption.

Full LED lights are available, and, depending on specification, can change the beam pattern automatically to shield traffic ahead from high beam.

Mercedes-Benz claims greater shoulder room inside with an increase of 9mm in the front and 22mm in the rear, with increases in elbow room of 35mm and 36mm respectively front and rear, plus increases in headroom of 7mm and 8mm.

Luggage capacity has been improved by 29 litres, increasing the minimum capacity to 370 litres – 10 litres greater than a BMW 1 Series and 10 litres short of an Audi A3 Sportback.

Visibility has been improved by slimming the size of the pillar claddings, with Mercedes-Benz claiming a 10% increase.

Ambient lighting in a choice of 64 colours, including illuminated air vents, will be offered as an option.

The car will launch with a new petrol and diesel engine, with other powertrains joining the range later in the year.

Available with a 43-litre tank as standard, or optional 51-litre tank, this engine also requires AdBlue.

A new 1.4-litre turbocharged engine powers the A200, producing 163PS and 184lb-ft of torque, with 53.3mpg on the WLTP combined cycle and CO2 emissions of 120g/km, and will be available with a cylinder shut-off with the 7G-Tronic automatic transmission.

Mercedes-Benz has confirmed an Audi A3 e-tron-rivalling plug-in hybrid will also arrive in the future.

Initially only the automatic transmission will be available in the A-Class, with a six-speed manual offered later in the year. In the UK, around 55% of the previous A-Class were automatics, and 70% were diesel, the latter confirming its popularity among user choosers.

While the A-Class comes with a fairly conventional suspension set-up for compact hatchbacks, engineers have sought to deliver greater ride comfort and in the outgoing models.

Like the current car, the new A-Class will be offered with front-wheel drive variants on most of the range, with availability of 4Matic all-wheel drive on some versions.

The new A-Class has improved camera and radar systems allow it to see up to 500m ahead. The A-Class also uses map and navigation data for assistance functions, for example reducing cruise control-set speed for bends ahead that need to be taken at a lower speed.

It also comes with extended Active Brake Assist as standard. Depending on the situation, this can help mitigate the consequences of rear-end collisions with slower-moving, stopping or stationary vehicles ahead, and with crossing pedestrians and cyclists, or prevent them altogether.

Attention Assist with adjustable sensitivity, which can warn the driver of inattentiveness and drowsiness, is also included as standard.

Blind Spot Assist is capable of warning of vehicles, including bicycles, in the danger area. For the first time, when at a standstill it can signal a visual warning in the exterior mirror before the driver climbs out that a vehicle is approaching. If the driver uses the door handle an additional acoustic warning sounds.

Other safety and assistance systems on larger Mercedes-Benzes are also offered on the new A-Class.

Enhanced lane keeping technology now operates in the absence of road markings, using navigation data and the proximity of other vehicles.

A new Mercedes-Benz user interface (MBUX) makes its debut in the new A-Class, including intelligent voice control with natural language comprehension, which is activated by the words "Hey Mercedes".

Mercedes-Benz claims it obeys virtually every command, recognises and understands nearly all sentences around infotainment and vehicle operation. For example, "Will the sun be shining tomorrow in Manchester?" is now understood equally as well as "Will the weather be fine in Manchester tomorrow?".

Although compatible with Apple CarPlay and Android Auto, Mercedes-Benz decided to create its own interface to retain greater control over development.

The A-Class is available with a head-up display for the first time.

Expect prices to start at around £24,000 for the A 180d at launch, with a lower entry price point to the range coming as more petrol engines are introduced.