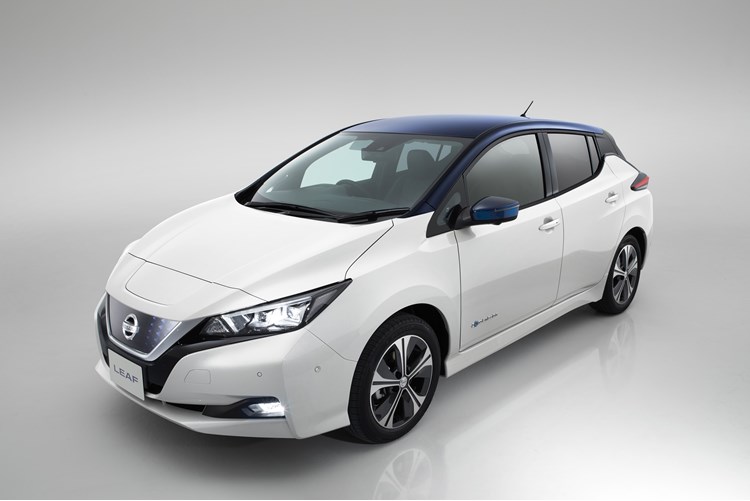 Nissan is planning for the “acceleration of electrification” with the launch of the new Leaf.

Previous versions have already sold more than 300,000 units and covered 2.2 billion miles worldwide, which is clear evidence, Nissan says, that zero-emission motoring is becoming mainstream, particularly as the new model has a range of more than 230 miles and an expanding recharging network.

Nissan has packed more power into the new Leaf, with a 40kW battery, compared to 30kW final version of the previous model.

This boosts its range to 235 miles on a single charge, compared to 155 miles for the outgoing model.

There is 150PS on tap, but more importantly 320Nm of torque from standstill, which provides potential for more rapid low-speed acceleration.

Nissan is also planning to announce a high-power version of the Leaf in spring 2019, which will offer even longer range up to 310 miles, while a sporting Nismo concept was revealed at the Tokyo Motor Show.

The new Nissan Leaf is a radical departure from the old model. Historically, it stood out as a unique design, but now it is firmly embedded in the brand family, with a familiar front end seen on models including the Qashqai.

The fresh new look works well. From the front-end, the deep U is a significant design feature, underlining the Nissan badge.

At the rear, the arrow-shaped lights and black upper body work are complemented by a coloured highlight above the rear diffuser.

Inside, the car seeks to continue the theme of the Leaf being part of mainstream motoring, with little to differentiate it as an electric car.

A large speedometer on the dashboard is supplemented by a digital screen, which shows a range of information about the car’s performance, including battery charge and range.

A solid multi-function steering wheel and seven-inch touchscreen on the centre console keep all controls in easy reach of the driver, while the interior exudes an ambience of quality and solidity, including doors that close with a satisfying thunk.

The rear hatch opens to reveal a large, deep boot with a high sill, with 435 litres of space with the 60/40 split folding rear seats in place.

A key feature of the new Leaf is Propilot, which offers semi-autonomous, hands-off driving in traffic using intelligent cruise control. This locks onto the car in front and reads the white lines on the road, to steer, accelerate and brake without driver intervention.

This is supplemented by traffic sign recognition that warns the driver of speed limits, while there is a range of additional driving features, including brake assist and hill start assist.

The Leaf is also fitted with e-pedal, a new system that allows most driving to be done without needing to touch the brake.

A single pedal acts as accelerator and brake. As a driver lifts their foot off the accelerator, the car will sense how quickly they have reacted and respond accordingly, either using regenerative braking or applying the physical brakes.

Charging is changing. Nissan has revealed a new range of charging units for electric vehicle fleets, which will speed up the recharging process and minimise downtime.

Nissan research shows 80% of charging takes place at home or at the workplace, so a new 22kW unit is being launched which is capable of charging Nissan EVs in two hours.

The ‘plug and play’ system has been designed for fleet and business owners, Nissan says, and the technology can be installed without digging up the road, although full details are yet to be revealed.

The charging point remains on the front of the car, where there are two connectors, one for rapid charging and the second for standard charging.

Nissan is also expanding its European rapid charging network, which currently has 4,600 outlets, but will expand to 5,600 by 2019.