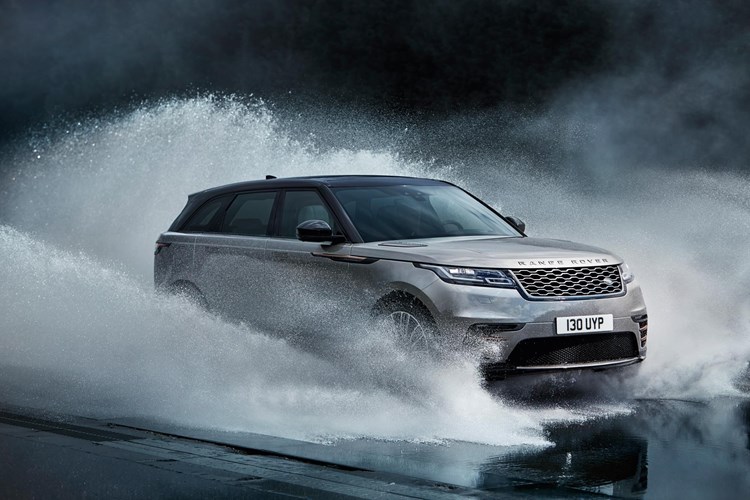 The Velar is a sleeker design than we’re used to seeing in a Range Rover. Although sitting between the Evoque and Range Rover Sport, it’s only slightly shorter than the latter, which no doubt helps accentuate its slimmer profile.

The shape is familiar, and is generally lacking in clutter, with a focus on clean panels apart from   a few vents in the wings.

Like the Jaguar F-Type, the Velar has flush, deployable door handles, which remain hidden in the bodywork until needed. It is the most aerodynamically efficient Land Rover to date, which also helps with refinement and fuel economy.

Every Velar features LED headlights as standard. As well as superior illumination and energy efficiency compared to bi-xenon lights, LED technology has also enabled the designers to create the most slender headlight clusters ever fitted to a production Land Rover. Rear light clusters are also LED, and have a 3D effect

Designed as a car with clear off-road capability, the Velar has maximum ground clearance of 213mm for coil-spring versions, and up to 251mm for cars with air suspension (standard on V6 engines).

The big technology showcase in    the Velar is the Touch Pro Duo infotainment system. It features two high-definition 10-inch touchscreens that form the centrepiece of the cabin.

The upper touchscreen’s menu is divided into three panels for navigation, media and phone. Interaction is by swiping across the screen to change between menus, pinching to zoom in and out. The upper screen can tilt through 30º to ensure optimum visibility.

The lower touchscreen is integrated within the centre console and manages features including the climate control and Terrain Response functions. There are no moving images and no complex menus – the touchscreen provides direct inputs to seat temperature controls, for example.

Two rotary controllers are reconfigurable to enable them to perform several functions, such as adjusting cabin air temperature, optional massage seat settings or the Terrain Response mode. Between them is a dial for controlling the audio system.

Micro SIM 4G connectivity, standard from S grade, allows the driver to use the online search to find destinations. The system can also calculate fuel range for the journey, alerting to filling stations on the route that are within range shown on the map – tapping on one is all it takes to set it as a waypoint. Fuel prices can also be shown, as can the filling station brand.

When delayed in traffic, the destination ETA can be shared via contacts either by text or email, automatically sending updates if necessary. Commute Mode learns daily drive routines so that, using both historical and real-time traffic information, it can suggest alternative routes and help reach the destination on time.

The entry point to the Velar range is the 180PS 2.0-litre Ingenium diesel, with two higher-powered diesel options. Customers can also choose a 240PS version of the 2.0-litre or a 300PS 3.0-litre V6 diesel.

The Velar also comes with an in-house four-cylinder petrol engine: a 250PS 2.0-litre. The range-topping model is a 380PS supercharged V6 petrol. They are all equipped with an eight-speed ZF automatic gearbox.

The clean lines of the Velar’s exterior are reflected in the simple design of the cabin. The instrument panel is set in a horizontal beam that stretches across the width of the car, and in the centre are two high-definition touchscreens that accommodate most of the controls and help keep the dashboard uncluttered. The lower screen allows various controls to be accessed and operated by touch.

In front of the driver are twin-analogue dials with a five-inch TFT display between them or, as standard from SE specification and above, a 12.3-inch info display.

While it might be expected to see leather upholstery in a luxury car, the Velar is also offered with a premium textile finish on standard models, with leather as standard on higher models.

The Velar is a five-seater and the rear bench has a 40:20:40 split. Its 2,874mm wheelbase provides a great deal of interior space, while the luggage compartment also looks quite generous.