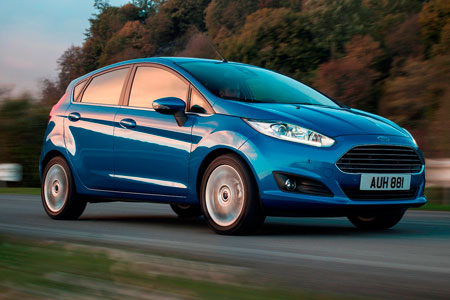 A tiny petrol engine is set to make a big impact on the appeal of diesel power in Britain’s most successful car.

A fifth of the Ford Fiesta models purchased by fleets over the past 12 months have featured diesel motors, but that proportion is expected to tumble next year when the company’s pacesetting new three-cylinder petrol engine becomes available in updated versions of the ubiquitous supermini.

Already accounting for one-third of all Focus sales, the 1.0-litre unit offers 125bhp with tailpipe CO2 emissions of 99g/km in the top model.

“In its most potent form, this engine develops double the power of our current 1.25-litre, four-cylinder engine and also boasts a 21g/km reduction in CO2 emissions,” said development engineer Andrew Fraser.

“I think we have a very strong proposition here. We believe this package will be of great interest to fleet drivers who cover less than 12,000 business miles a year – particularly when they realise there’s no longer any need to pay a hefty premium for better economy.

“While there is no doubt diesel remains the best for ultimate fuel efficiency over higher mileages, this engine makes a lot of sense in this class of car.”

One-third lighter and 11mpg more frugal than the four-cylinder engine, the British-designed motor has ample torque to provide a refined and unruffled demeanour that belies its small size.

Quiet and free-revving, it uses a novel counter-balancer system instead of the traditional balancer shaft to feel much like a five-cylinder unit as it accelerates in sprightly fashion and zips along at motorway speeds spinning at just 2,500 revs in top gear.

In another departure from the norm, the award-winning motor dispenses with the usual metal timing belt in favour of a lighter and cheaper alternative that is maintenance free. Sealed for life, it runs in oil and lasts for 150,000 miles, the expected life of the engine.

Fresh styling gives an Aston Martin look to the front of the car, which now has a power dome bonnet and daytime running lights.

The car is the first in Europe with MyKey, which allows owners to programme an ignition key that restricts top speed, reduces maximum audio volume and prevents the driver from disabling anti-skid equipment.

Standard across the range, the feature has been introduced after surveys showed drivers under 25 are up to twice as likely to be involved in a fatal accident.