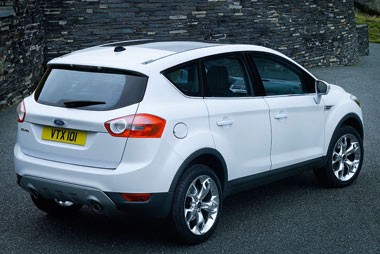 I was extra keen to get my hands on the Ford Kuga after spending the past five months driving one of its closest rivals – the Volkswagen Tiguan.

But behind the pretty façade is a vehicle that doesn’t fail to live up to expectations, with bags of room and a comfortable driving position.

For perk users with a family, it’s the ideal choice as rear and front seat passengers can stretch out and relax, while the cavernous boot is accessed via a two-piece tailgate.

The slick six-speed gearbox and torquey engine make it feel light and nimble on the road compared to the more assured Tiguan.

But both now have models below the 160g/km threshold, good news for both company car drivers and fleets, and no excuse for not including them on choice lists.

However, where fuel economy is concerned, Ford’s quoted 46.3mpg combined has been hard to achieve, with best test figures of 33.4mpg so far – which was virtually the same as our automatic Tiguan.

Inside, the Kuga’s layout is practical.

The ergonomic steering wheel is easy to handle and the information display comprehensive. However, some of the gauges echo the quality of a cheap Christmas cracker toy.

While the Tiguan wasn’t miles better, it at least showed some signs of quality.

The Kuga’s keyless start button is simple and stylish, but I wonder if its introduction is based more on the need for gimmick than practicality.