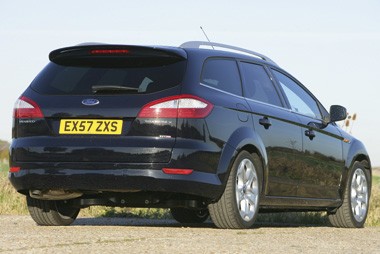 I am reassuringly told by my wife that size isn’t everything… but when it comes to choosing a new estate it comes high on her tick list.

Happily for all – including Cambridgeshire’s marriage counsellors – my long-term test car is one of the biggest and widest on the market.

Even after all these months – almost 11 – it’s a surprise just how much I can load into the Mondeo estate and still discover there is room for more.

The real test will come next month when I move house, but until now this Ford has eaten everything I have shoved into its cavernous mouth.

Unfortunately, there is a price to pay when loading anything that is both heavy and has sharp edges – like our twins’ buggy – and the Ford’s rear bumper has paid that price.

While the flat load area makes hauling heavy items into the back easy, the colour-coded bumper, which is in-line with the load area, has taken a beating.

Despite my wife’s best efforts to lift it clear of the bumper, the buggy’s sharp corners have scratched the paint and the plastic underneath.

Ford’s designers thought of most things but they surprisingly opted not to fit a scuff protector.

To accommodate all the flotsam and jetsam that bobs along with most families, the Mondeo is very wide – it is massive 17cm wider than the current BMW 7 Series – which makes it very comfortable.

It also makes it difficult to slot in multi-storey car parks while still leaving enough room each side to get the children out.

Some would consider leaving them in the car as a bonus when faced with traipsing round John Lewis on a Saturday morning, but my wife is not one of them.

Of course, being an estate, the Mondeo is also very long – 4.83m to be exact – which is just a centimetre shorter than BMW’s 5 Series Touring.

This length has caught some drivers out in that same multi-storey, as more than once we have returned to find tell-tale scuffs on protruding corners.

Intelligently, Ford fitted the estate with parking sensors, which have proved useful for us.

It is just a shame that not every other car has them.

While loading up the Mondeo for another haul to see the in-laws, I noticed a large black box sitting forlornly in a recess in the boot.

Blowing off the dust, I saw that it was the multi-change CD player, which came as an option (between £1,000 and £1,600 depending on the model) with the navigation system.

I have never used it, despite owning a substantial CD collection.

I expect I am not alone in ignoring this weighty box in the boot.

I prefer to plug in my iPod when not listening to intelligent speech like Radio 4 or the two-year-olds’ chatter – whichever is louder – while driving.

In the era of the iPod and USB connectivity, why would anyone want to pay extra for something that takes up room and attracts dust in the boot?

Of course, in the Mondeo’s massive interior, it is easy to overlook the CD changer, which is probably why I have done exactly that for the past 11 months.