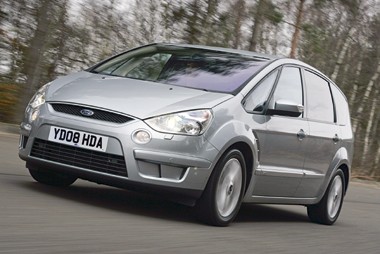 According to the judges at the last Fleet News Awards, the Ford S-MAX is “the first MPV that many people will consider”.

And you can see why. It looks good, drives well, has plenty of kit and is versatile enough to provide full seating for seven or a host of other uses thanks to its interior design and functionality.

It’s a strong all-round package, and one worthy of being named best people carrier at our awards ceremony earlier this year.

And not one to rest on its laurels, Ford has been busy improving the S-MAX. The top-spec Titanium version now gets Bluetooth telephony, solar reflective windscreen, ambient lighting and chrome doorhandles as standard. Which is all very nice.

But it is under the bonnet where the biggest change has been made, with the 2.2-litre TDCi diesel engine being introduced on top-spec Titanium and Titanium X versions.

Delivering 175bhp, this new engine has seen service in the Ford Mondeo and Galaxy.

And very good it is, too. It’s still a touch growly at idle, but on the move it is a gem, delivering an uninterrupted stream of power from right down the bottom of the rev range.

The smooth-shifting six-speed manual gearbox means that progressing through that wide band of power is effortless, while all the while you marvel at how a big, boxy(ish) seven-seat people carrier rides and handles so well – certainly on a par with most upper-medium models.

And you continue to be impressed with the way the interior is so flexible, going from two-seater ‘van’ to housing the full seven occupants.

And then you look at the price – nearly £24,000 for the Titanium model on test. That’s a lot of money for a people carrier, no matter how chrome its door handles are or how reflective its solar reflecting windscreen is.

Looked at in isolation this test S-MAX is a very good car, but once you put it into perspective against its rivals (and stable-mates) it becomes something of an irrelevance.

A standard 2.0 TDCi S-MAX diesel with 136bhp is available for under £20,000, which makes far more sense for both company and driver in terms of tax bills and running costs.

The fact is that no-one really needs the extra power on offer in this 2.2 TDCi engine when the smaller unit is powerful enough to shift the family around.

Yes, the 2.2 feels quicker, but not massively so and certainly not £4,000-of-extra-money quicker.

The S-MAX remains a very good car, but this version is perhaps a step too far.

Ford only offers the new 175bhp 2.2 TDCi diesel engine in high-spec guises, and as a result the front-end price is pushing £24,000. The others all make it look expensive, especially the Vauxhall (although it offers ‘only’ 150bhp), which undercuts its arch-rival by more than £3,000.

With its front-end price and the lowest emissions, the Vauxhall has a clear lead. It will cost a 40% taxpayer £165 a month in BIK tax. The Ford’s high price and higher emissions mean it will cost the same person £206 a month – £40 a month more than in the Zafira.

With variable servicing intervals and 16-inch wheels, the Volkswagen has the lowest SMR bills, costing around £2,200 over three years and 60,000 miles. The rest have 17-inch wheels so tyre costs will be higher. Vauxhall stretches service intervals to 20,000 miles, while Ford says 12,500-mile gaps and Toyota just 10,000.

Vauxhall claims the Zafira will return an average of 46.3mpg, which equates to a diesel spend of £7,500 over 60,000 miles. The Ford and Volkswagen both return 42.8mpg and the Toyota 41.5mpg. This gives the Zafira an advantage of around £500 in fuel costs over the Ford.

At a fraction under £26,000 in wholelife cost terms over the typical fleet lifecycle, the Ford is an expensive choice thanks to its front-end price and depreciation cost. The Vauxhall and Toyota are closely matched, costing around £300 more than the cheapest car, the Touran.

As an all-round package the Ford is a strong one, blending stylish looks, a decent drive and a high level of standard equipment.

However, it is let down by its performance on the balance sheet – simply put, it will cost a fleet too much to run and a driver too much in tax terms.

The Toyota and Volkswagen are dependable, solid choices and are closely matched in financial terms. Which leaves the Vauxhall. The Zafira is not the cheapest for a company to run, costing £300 more than the Volkswagen over 60,000 miles, but its massive advantage in tax terms means it is the best all-round offering. It may not have the outright power of the others, but does that matter here?