"The CR-V Hybrid does not feature a gearbox, as the engine is mainly used as a generator." 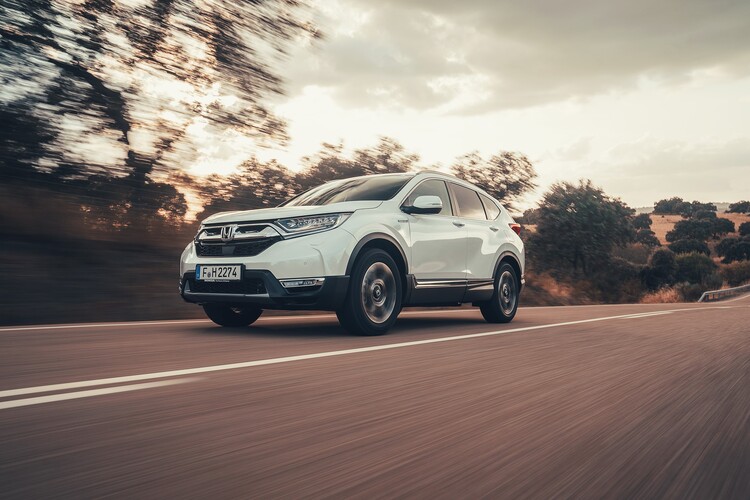 Declining diesel sales have led Honda to abandon the fuel for its all-new fifth generation CR-V.

David Hodgetts, the company’s UK managing director, said the new petrol hybrid engine in the CR-V is the “most important engine the company has launched in more than 10 years”.

Using a 2.0-litre petrol engine and two electric motors, the powertrain setup in the CR-V Hybrid operates differently compared with most hybrids currently on sale.

Power is delivered to the wheels by an electric motor almost all of the time. The engine is used to power a second generator, providing energy to keep the drive motor going.

A battery allows for zero-emission driving over short distances and the engine can drive the wheels directly when it is more efficient.

The concept is all about keeping the engine in its efficiency ‘sweet spot’.

CO2 emissions for the CR-V Hybrid are measured at 120g/km for the front-wheel drive models and 126g/km for the all-wheel drive versions. While not class-leading for a hybrid, they are significantly lower than the standard petrol CR-V.

Official combined fuel economy is rated at 53.3mpg. During our testing we found 42mpg to be more realistic.

The CR-V Hybrid does not feature a gearbox, as the engine is mainly used as a generator. Although, at certain speeds a special clutch can connect the engine directly to the driveline.

In order to provide a more typical feel and sound to the car, Honda has engineered the system to increase the engine speed as you accelerate. There are also steering wheel-mounted paddle shifters that activate the regeneration function, to simulate engine braking.

The engine’s operation is fairly noticeable, it’s not too different to driving a CVT-equipped car – so expect a high-revving engine note when accelerating.

Around town, the car does well to utilise its zero emission capability – with a maximum range of around 1.2 miles. When more power is needed, or the battery becomes depleted, the engine fires into life.

The CR-V Hybrid is available in S, SE, SR and EX grades. All models come equipped with a suite of safety technology as standard.

Honda expects the range-topping EX model to be the most popular.

In developing the CR-V, the Japanese brand reduced chassis weight and increased rigidity to improve drivability.

As a result, the CR-V drives well, has little body roll and a refined cabin.

Interior quality is high with the only disappointment being the infotainment system, lifted from the Civic. It is dated and uses a smaller screen (seven inches) than most rivals.