IT IS a truth almost universally acknowledged that most SUV drivers simply never head off road, so full marks to Honda for realising that its new CR-V didn’t need the capability to plough up to its axles in mud.

Instead, it has made the CR-V perhaps the most refined SUV on-road, and in the process created a car which stands out as an ideal choice for user-choosers who want the chunky looks of an off-roader but want the car to be easy to live with when they drive on business.

The old CR-V – winner of the Small SUV title at last year’s Fleet News Awards – set the benchmark in the class and the new version makes a huge leap forward over it.

Not only is the car quieter, more refined and better to drive, it also benefits from a fresh new look inside and out, lower CO2 emissions (173g/km compared to 177, dropping the car by a benefit-in-kind tax band) and improved fuel economy – up by 1.3mpg to 43.5 on the combined cycle). So company car drivers will not only enjoy lower company car tax bills and more miles to the tank, but the whole experience has been improved.

Under the bonnet of our test car was the 2.2-litre i-CTDi turbodiesel which is carried over from before, offering 140bhp and 251lb-ft of torque.

It’s one of the most refined diesels on the market with little in the way of diesel clatter at start-up and low noise and vibration levels while on the move.

Thanks to that decent amount of torque the CR-V feels much sprightlier than before – in driving terms, it feels more like an estate car than an SUV.

The six-speed manual gearbox is slick, as you would expect from a Honda, and offers positive shifts through a fairly short-throw lever.

But it is the handling which really impresses in this car. The centre of gravity isn’t as high as before and this contributes to a far more planted feel. Where the old model would roll around in corners, the new CR-V stays remarkably flat and composed during cornering.

The ride is on the firm side and rutted roads send a shudder through the cabin, while the steering is over-assisted. However, the CR-V does turn in sharply.

The reworked interior follows the same basic architecture as before, with the gearlever mounted on the bottom of the centre console with a large colour screen above it. The materials used on the dashboard and door trims are first rate, and you just know this car is still going to feel tight after a typical fleet life. 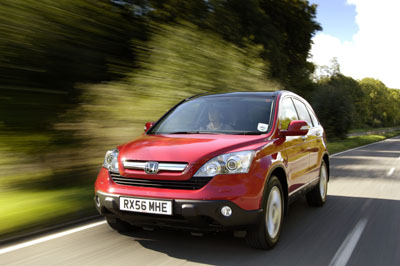 For now the CR-V reigns supreme as the best small SUV on the market, but 2007 is the year of new launches in this sector. It will be interesting to see if Vauxhall, Volkswagen, Citroën, Peugeot, Mitsubishi et al can topple the CR-V from its perch.