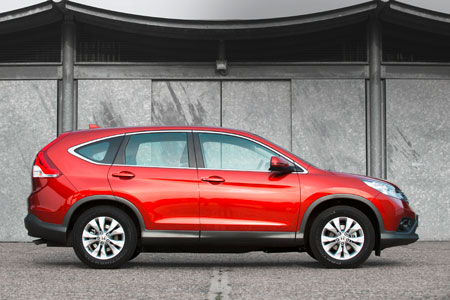 Little things could add up to a lot for Honda when the latest version of its popular sports utility model goes on sale in the next few weeks.

Executives at the Japanese firm believe that a host of detail improvements are set to boost the appeal of their CR-V line-up in the business motoring sector.

Smaller bodywork clothes a bigger interior that has more space and comfort for occupants, as well as a king-size cargo deck to cope with the largest load in the class.

“We are confident business users will like the results of the detailed research we have carried out over several years,” Honda UK national corporate sales manager Gail Chambers told Fleet News.

“The market is more crowded nowadays as the industry responds to growing demand for cars of this type, but we still believe our vehicle is in a league of its own for efficiency, performance and value and we’re keen to build on our reputation for having a strong following of satisfied customers.

Despite its smaller size, Honda’s sleeker all-purpose car uses lower seating positions and sculptured door trims to provide greater interior width and an additional 147 litres of space to take boot capacity to 589 litres with the seats in position. When they’re folded, a 1.57m long floor can carry a massive 1,648-litre load behind a powered tailgate.

Thanks to an adaptation of the acclaimed fold-flat seat system in the Jazz supermini, just one tug of a lever is all that’s needed for each rear squab to glide gently forward, its headrest to swing down and the bench to slide gracefully into the footwell area.

Adding greater premium feel has been a critical part of the CR-V development programme and improved aerodynamics make the new model 50% quieter. But the 12% drop in tailpipe emissions and a similar improvement in operating economy from smoother under panels and standard stop-start technology are significant in increasing economy.

On the road, it’s a big improvement over the previous version, with better refinement evident, if it lacks some of the sharpness and poise of rivals such as the Ford Kuga and Volkswagen Tiguan.