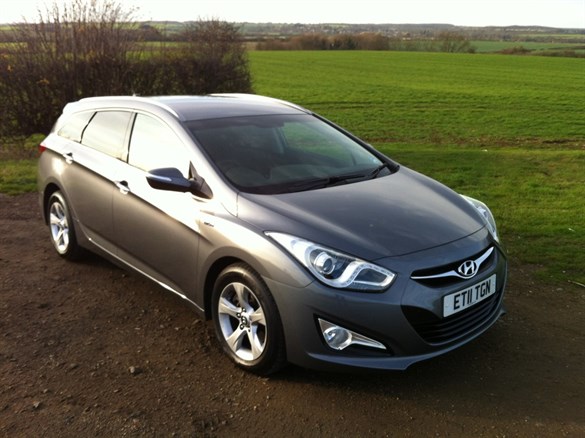 Conversations regarding our long-term Hyundai have tended to follow the same pattern during its time with us.

“What make of car is this?”

Whether they are impressed enough to buy in future remains to be seen, but it is certainly the case that when people experience the quality that Hyundai now builds into its products , they are generally positive.

In the business world, there don’t seem to be any built-in brand perception for Hyundai, because people haven’t had any experience of the brand in their motoring lives, so it seems there is a blank consumer canvas ready for the firm to write on.

Over the past few thousand miles, the brand messages I feel the i40 has given me are quality, design, reliability and, increasingly, mainstream – especially as pricing is now on a par with fleet industry stalwarts such as Ford and Vauxhall.

I have managed to identify relatively few niggles, my main ones being the electronic handbrake and the push-button start system.

As a result, you have to remember to pull the switch to apply the handbrake. If you don’t, or don’t pull up the switch far enough, the car is free to roam where it wants.

The push button start is normally trouble free, but as it is linked to the automatic engine stop-start system, there can be confusion when you park. So you stop in your parking space and the engine automatically turns off.

The engine is still ‘on’, but the only way of telling this is the engine start button, which is hidden behind the steering wheel. A little message on the dashboard wouldn’t go amiss, as the warning chime when you open the door could be for anything.

Combine these two niggles and the typical rush that is family life and the result has been a fair few angry moments of button pressing and switch pulling.

However, if that is the worst of my criticisms after thousands of miles, then Hyundai has done a pretty good job with the i40 and I am sure there is an increasing army of drivers out there who would agree.

Our Hyundai i40 estate has just earned another plaudit, having been Highly Commended in the prestigious Fleet News Awards.