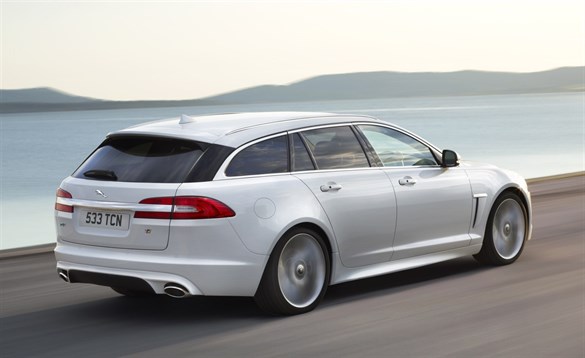 Jaguar has been absent from the estate car sector since the demise of the X-type estate. The XF Sportbrake addresses this hole in Jag’s range and also takes the XF further into battle with its key rivals, the Audi A6 and BMW 5 Series.

These are the two cars Jaguar mentions when referring to the XF Sportbrake’s competitors, with the voluminous Mercedes E-Class Estate conspicuous by its omission from the conversation. However, this doesn’t mean the XF Sportbrake is merely a token effort at building a wagon by Jaguar.

The boot of the XF Sportbrake offers a maximum cargo capacity of 1675-litres, which sits slap bang between the BMW 5 Series Touring’s 1670-litres and the Audi A6 Avant’s 1680-litres. With the 60/40 split and fold rear seats in place, the Jag offers 550-litres of luggage space, which is a shade behind the Audi’s 565-litres and the BMW’s 560-litres, though this is quibbling over space the size of a small shopping bag in estates that are all very good at carrying plenty of gear. 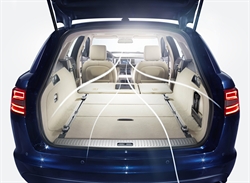 Further evidence of Jaguar genning up on its rivals to help create the XF Sportbrake is clear in the one-touch handles for folding the rear seats flat. These are similar to the ones found in a Mazda 6 Estate and work quickly and easily. With the rear seats down, there’s a long, flat load bed that extends to just 30mm shy of a full 2.0-metres in length.

Jaguar has also designed the Sportbrake with a load sill that sits flush with the boot floor, which makes it much easier to hump heavy goods in and out of the car. There are also floor rails that allow a variety of nets and retaining bars to be fitted to keep luggage from rolling loose around the boot.

A hidden storage area underneath the boot offers some secure storage, but there’s nowhere to keep the load cover when it’s removed to make full use of the XF’s maximum load space.

Jaguar points out the XF Sportbrake’s boot is carpeted with the same shag pile found in the main cabin, which it says offers a more premium feel than its competitors. We’re not sure many buyers will notice this, but they might well take notice of the wider range of options for the Sportbrake. These include a tow bar, roof box and bicycle carrier to give the Jag wagon that essential touch of lifestyle appeal.