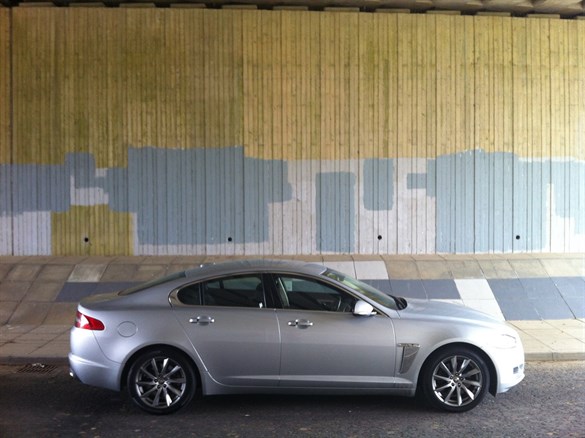 Six weeks into our long-term test of the Jaguar XF and, while we are generally highly impressed with the XF, there are a few disappointments.

The principal one is fuel consumption: I’m finding it difficult to get above 40mpg. It appears I’m not the only one, as Fleet News reader Keith Bell wrote to say he was also struggling to improve upon a 38mpg average, although on one longer motorway journey he achieved 43mpg.

I can’t even put it down to the effect of cold weather tyres, which typically cost 2-3mpg, as the Jag isn’t fitted with them.

Using the official figure for budgeting purposes, a fleet of 50 XFs would be costing a company an additional £21,000 a year over 10,000 business miles on a fully reimbursed basis.

That said, a colleague in the XF rival Mercedes-Benz E-class, which claims to return 57.6mpg, is getting a proportionally similar under-achievement of around 42mpg.

According to the trip computer, a full tank will only get me 530 miles. Compare that with Fleet News tester Maurice Glover, who travelled 638 miles to Frankfurt on one tank, with the trip computer showing 108 miles remaining (Fleet News, October 27, 2011; click here for review - http://www.fleetnews.co.uk/cars/review/first-drive-jaguar-xf-22-diesel/41379/).

His average consumption was 52mpg. The secret? Optimum driving means a constant 75-80mph in eighth gear where revs are around 1500rpm – perfect on congestion-free German autobahn; dicing with the law in the UK.

I’m determined to improve my performance, however, so will report back in the next review after re-setting the trip for my next journey.

My other gripe is the automatic gearbox. It is often slow to engage at junctions, which means you either crawl onto the road if you push the accelerator gently or almost fishtail out if you press harder.

Judging the balance between the two to enable smooth progress is tricky, although it is made easier by using the paddle-shift override to engage the gear in advance.

It’s far from all grumbles in the XF, however. The car is one of the most stylish in the sector and the cabin is one of the most pleasant to spend time. After a brief stint in an Audi A5, I was relieved to return to the XF’s much comfier seats.

Whoever designed the interior either has young children or is constantly losing coins down the back of their sofa. In a brilliant piece of thinking, the back of the rear seats is stitched to the base, which means crumbs and other morsels can no longer slips through the gap. Yet, the seats still fold forward to extend the boot space, if required.

Other surprise and delight features include the keyless entry. You can unlock and lock the car using any of the four doors; many cars operate via the driver’s door only. It’s very convenient with two kids to strap in the back.